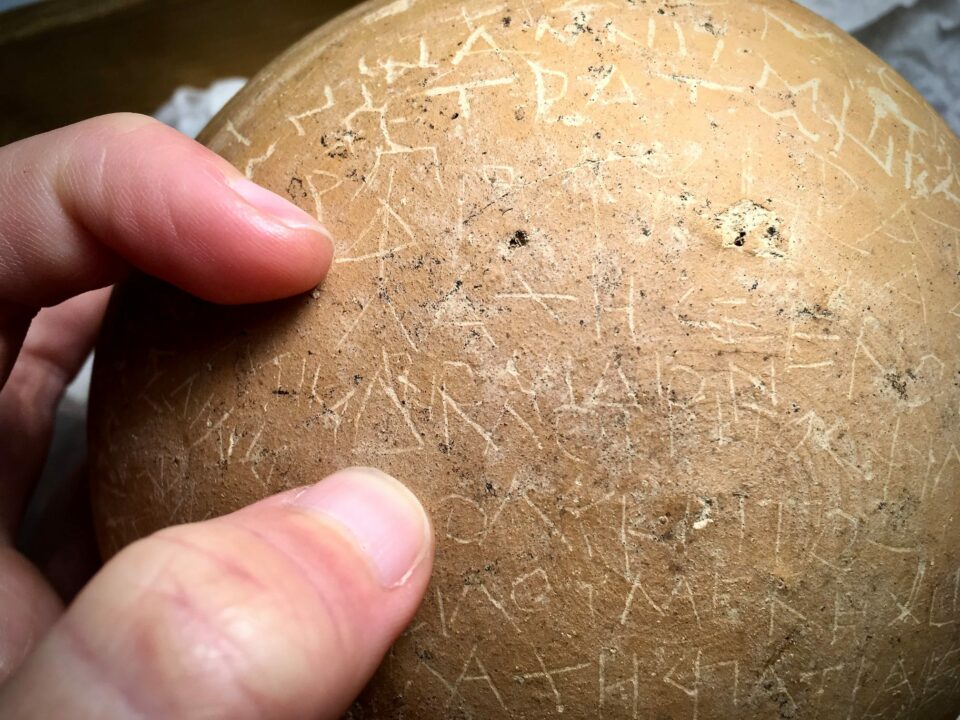 Archaeologists believe that a 2,300-year-old jar from Ancient Greece containing the bones of a dismembered chicken was likely used as part of a curse to paralyze and kill 55 people in Athens. The recent discovery brings new evidence to light regarding the use of magic n Ancient Greece.

“Curse tablets” or thin sheets of lead inscribed with curses against a certain person, are well-known in Greece. They are commonly found underneath the ground after being buried there many centuries ago by the person who wanted someone to be cursed.

But in a twist on this type of witchery, archaeologists recently discovered the pottery jar filled with chicken bones, along with a coin, underneath the floor of the Athens Agora’s Classical Commercial Building, which millennia ago was the site of craftsmen who plied their trades there.

Jessica Lamont, a professor of Classics at Yale University, wrote in an article published in the American School of Classical Studies in Athens’ journal Hesperia “The pot contained the dismembered head and lower limbs of a young chicken.”

Lamont noted “All exterior surfaces of the (jar) were originally covered with text; it once carried over 55 inscribed names, dozens of which now survive only as scattered, floating letters or faint stylus strokes.”

The professor then added the Greek writing uses words that may mean “we bind.”

The experts involved in the discovery believe that the nail and chicken parts together most likely played a role in the curse on the 55 different individuals. Nails, which are a common feature associated with ancient curses, “had an inhibiting force and symbolically immobilized or restrained the faculties of (the curse’s) victims,” Lamont stated in her scholarly article.

The archaeologists determined that the young chicken had been slaughtered to be used as part of the ritual; they believe that the people who employed the magic may have wanted to transfer “the chick’s helplessness and inability to protect itself” to those they cursed by writing their names on the outside of the jar, Lamont stated.

She further explains that the head of the chicken, which had been twisted off, and its piercing, along its the lower legs, meant that the corresponding body parts in the 55 unfortunate people would also be similarly affected.

“By twisting off and piercing the head and lower legs of the chicken, the curse sought to incapacitate the use of those same body parts in their victims,” Lamont notes.

She goes on to state “The ritual assemblage belongs to the realm of Athenian binding curses, and aimed to ‘bind’ or inhibit the physical and cognitive faculties of the named individuals.” The pottery vessel was discovered near several burned pyres that still contained the burned remains of animals — another aspect of the curse, according to Lamont, which may have been something believed to have increased the power of the curse.

The author of the academic paper states in an interview with Live Science that the style of the handwriting on the jar suggests that at least two individuals were responsible for writing the names on the vessel. “It was certainly composed by people/persons with good knowledge of how to cast a powerful curse.”

She went on to speculate that the elaborate, time-consuming ritual may have been part of a legal proceeding at the time.

“The sheer number of names makes an impending lawsuit the most likely scenario,” Lamont wrote in her paper, adding the “curse composers might cite all imaginable opponents in their maledictions, including the witnesses, families and supporters of the opposition.”

The rule of law was important in Ancient Greece and trials were not only a common occurrence in Athens but also attracted widespread attention and dispute.

Additionally, Lamont posits, the jar’s location, in a building used by craftspeople, including potters, no doubt may mean that the curse involved a dispute having to do with that workplace.

“The curse could have been created by craftspersons working in the industrial building itself, perhaps in the lead-up to a trial concerning an inter-workplace conflict,” Lamont theorizes in her article.

However, at the time, Athens and its surrounding regions were in the midst of political turmoil after the untimely death of the young Alexander the Great approximately 2,300 years ago.

After he died in 323 BC in what is now Babylon, Iraq, in the middle of a military campaign, a military and political void was left, in which his generals and other empire officials fought for control.

As Lamont explains, historical records show in great detail who the players were who fought in factions for control of the great ancient city during “a period plagued by war, siege and shifting political alliances.”

The pottery jar used as part of the curse was excavated in 2006, by Marcie Handler, who was a doctoral student in Classics at the University of Cincinnati at that time. However, its use as part of a magic curse but was only brought to light after recent analysis and deciphering by Lamont.