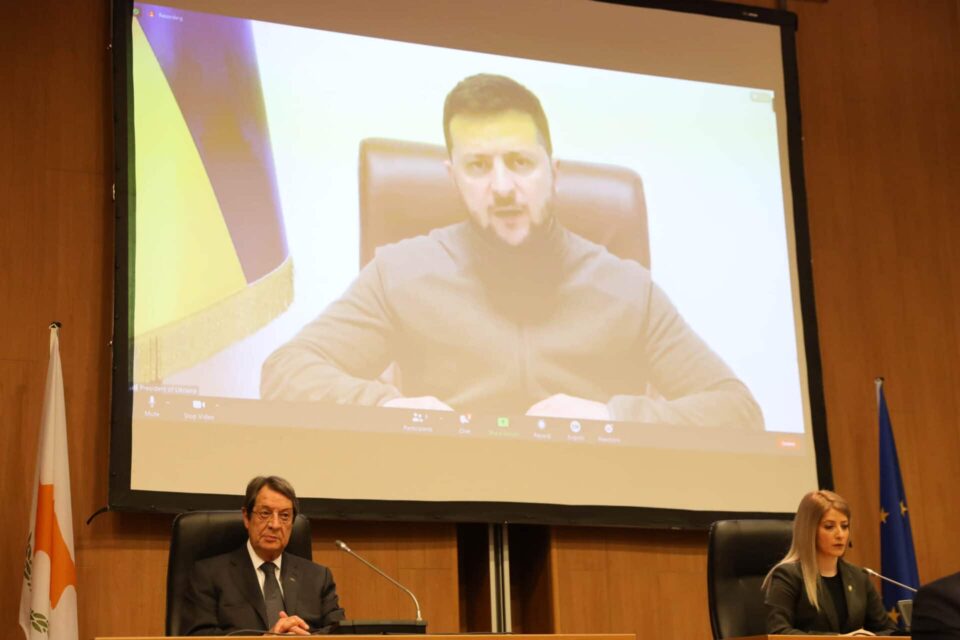 Ukrainian President Volodymyr Zelensky on Thursday called on Cyprus to close its ports to all Russian ships and to deny “privileges” to Russian nationals but omitted any reference to the Turkish invasion of the island in 1974.

He was speaking to the Cypriot legislature via video link – part of his virtual tour of addressing national parliaments across the globe. On Thursday he also addressed the Greek parliament.

“I’m grateful to you for your moral stance. You reacted to the Russian invasion and banned the docking of Russian ships in your ports,” Zelensky said.

He added that Cyprus has “tools to pressure” its traditionally close friend Russia, and urged Cypriot authorities to “close the ports” to all Russian private yachts.

He called on the Cypriots to revoke passports issued to wealthy Russians under the citizenship for investment scheme shut down under corruption allegations in November 2020.

“Stop Russian golden passports, dual citizenship. Except those where there is evidence they do not harm Ukraine,” Zelensky said.

After attending the session, Cypriot President Nicos Anastasiades told reporters that instructions were given for the revocation of four passports of Russians on the European Union’s sanctions list.

During the investment scheme, Cyprus issued hundreds of passports to Russian nationals and their families.

In November 2020, the Mediterranean island dropped the initiative after Al Jazeera aired a documentary showing reporters posing as fixers for a Chinese businessman seeking a Cypriot passport despite having a criminal record.

A public inquiry found that around half of the 6,779 passports issued under the program were granted illegally.

Zelensky ignores the Cyprus invasion in his speech

Zelensky’s speech to the Cypriot legislature contained no reference to the Cyprus invasion by Turkey in 1974, an omission that displeased President Nicos Anastasiades.

Although he said that he was not expecting Zelensky to address the Cyprus issue at this stage. “It’s not what we expected today. What we expected today is to hear what the Ukrainian people are suffering now, the same we suffered in 1974,” Anastasiades said.

He added, however, that Zelensky should have made the reference. “The rule of law does not distinguish between states if the rights of some are violated but the rights of others are ignored.”

The Ukrainian foreign ministry said that Zelensky will make a written statement on the Turkish invasion of Cyprus, while diplomatic sources in Kyiv stated that Ukraine has supported and adopted all UN resolutions on the Cyprus issue and, therefore, there is no question of non-recognition of what Cyprus has experienced from the Turkish invasion.

Fire Breaks Out on Mount Penteli Just North of Athens