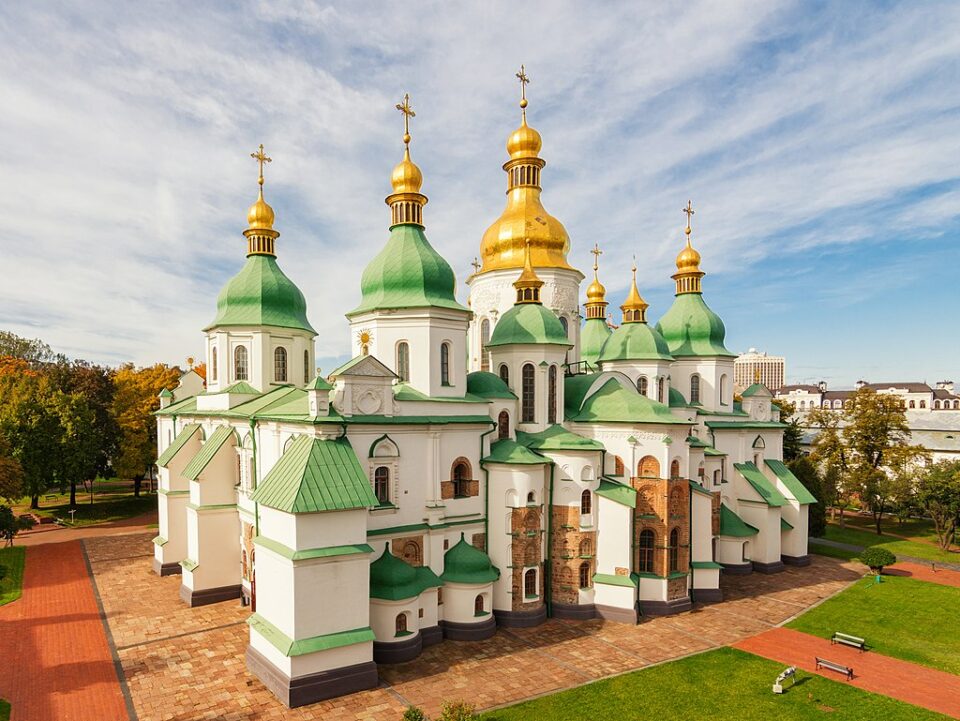 UNESCO, the UN’s Educational, Scientific and Cultural Organization, says it is “gravely concerned” over its listed sites in Ukraine which are threatened by the Russian invasion of the country.

Sites of supreme Ukrainian importance have already sustained damage, including one museum which houses works that are emblematic of Ukrainian and Ivankiv culture, located about 50 miles north of the capital city of Kyiv.

The Ivankiv Museum was reportedly burned by Russian forces after the invasion, leading to the loss of several paintings by Ukraine’s beloved folk artist Maria Prymachenko. A local man risked his life by running into the building; he was successful in saving ten of her 25 works that were stored there, according to a report in The Times of London.

“The museum was the first building in Ivankiv that the Russians destroyed,” the artist’s great-granddaughter, Anastasiia Prymachenko, told interviewers from the Times. “I think it is because they want to destroy our Ukrainian culture — the museum is the only thing we have there, with lots of artifacts showing Ukrainian and Ivankiv culture.”

Ukraine boasts seven sites on UNESCO’s World Heritage List, including the 11th-century Saint Sophia Cathedral in Kyiv, which is considered “one of the finest” examples of early Rus-Byzantine ecclesiastical architecture, according to Encyclopedia Britannica.

The former cathedral, which is now a museum, is one of the city’s best known landmarks and the first heritage site in Ukraine to be inscribed on the World Heritage List along with the Kyiv Cave Monastery complex.

Aside from its main building, the cathedral includes an ensemble of supporting structures such as a bell tower and the House of the Metropolitan.

The cathedral is named after Constantinople’s Hagia Sophia (Holy Wisdom) cathedral which was dedicated to the Holy Wisdom rather than to a specific saint named Sophia. The first foundations of the building were laid in 1037 or 1011.

According to Dr. Nadia Nikitenko, a historian who has studied the cathedral for 30 years, the cathedral was founded in 1011, under the reign of the father of Yaroslav the Wise, the  Grand Prince of Kievan Rus, Vladimir the Great.

This has been accepted by both UNESCO and Ukraine, which officially celebrated the 1000th anniversary of the cathedral in 2011. After the Russian Revolution of 1917 and during the Soviet anti-religious campaign of the 1920s, the government plan called for the cathedral’s destruction and transformation of the grounds into a park “Heroes of Perekop” (after a Red Army victory in the Russian Civil War in Crimea).

Although the cathedral was saved from destruction, St. Michael’s Golden-Domed Monastery nearby was destroyed in 1935. St. Sophia Cathedral exists today primarily thanks to the effort of many scientists and historians of that time.

The city center of Lviv, with many treasures of medieval architecture, is another historical treasure of Ukraine. As the invasion unfolded, courageous members of the public have worked alongside art experts to save their beloved art and artifacts. Museum workers hurriedly dismantled entire exhibitions for safekeeping before they headed to the frontlines.

Some Lviv residents helped wrap centuries-old statues in plastic and foam for safety, according to a report in Smithsonian Magazine.

International organizations have quickly stepped up to the plate in the effort to save important Ukrainian cultural objects and buildings in the embattled country. Smithsonian Secretary Lonnie G. Bunch says in a statement that the Smithsonian’s Cultural Rescue Initiative, which has tasked itself with protecting cultural heritage in the face of disasters, has contacted individuals and institutions in Ukraine who are already trained in what he calls cultural “first aid.”

The UNESCO statement also called attention to damage caused in the cities of Kharkiv and Chernihiv, both of which have sites on Ukraine’s tentative list for nomination to the World Heritage List.

Chernihiv’s historic center has traces of settlement that date all the way back to the ninth century. Kharkiv’s expansive Freedom Square was hit by a Russian missile that damaged the city’s opera house, concert hall and government offices.

The attack, on such purely civilian targets, drew international condemnation, with Ukrainian President Volodymyr Zelensky declaring that it was nothing less than an example of “terror against Ukraine,” adding “There were no military targets in the square — nor are they in those residential districts of Kharkiv which come under rocket artillery fire.”

In what is surely one of the war’s many supreme ironies, the Babi Yar Holocaust Memorial in Kyiv was hit by a Russian missile struck a building on the premises last Tuesday, killing five people nearby. The building was set to become part of the museum that is also at the site.

A total of 33,771 Jews and others, including Roma, ethnic Ukrainians and Soviet prisoners of war of the Nazis, were killed there over two days in September of 1941 in one of the darkest episodes of WWII.

As the war went on, German forces perpetrated additional crimes against humanity at Babi Yar, using the area as a mass grave to dispose of up to 100,000 bodies, until the Soviets regained control of Kyiv in 1943.

The retreating Germans had bulldozed the ravine, burning bodies in huge pyres in an effort to cover up their horrific crimes at the site. “It is symbolic that (Russian President Vladimir Putin) starts attacking Kyiv by bombing the site of the Babi Yar, the biggest Nazi massacre,” declared author and activist Natan Sharansky, the chair of Babi Yar’s advisory board in an interview with the BBC.

Ukrainian sites are a “testimony of the past”

The Babi Yar bombing occurred after Russian President Vladimir Putin called Ukraine’s leaders “neo-Nazis,” claiming his goal was the “denazification” of the country.

Sharansky charged the Russian leader with attempting “to distort and manipulate the Holocaust to justify an illegal invasion of a sovereign democratic country” in the “utterly abhorrent” move.

Although the memorial itself did not sustain any critical damage, the attack sparked calls for the historic site to be protected.

UNESCO’s statement says that the international agency is taking measures including the marking of “key historic monuments and sites across Ukraine with the distinctive emblem of the 1954 Hague Convention, an internationally recognized signal for the protection of cultural heritage in the event of armed conflict.”

The body will also monitor any damage to cultural sites in Ukraine through satellite imagery, it states. Its staff is now coordinating a meeting with museum directors in the country in a bid to help them preserve their collections despite the ravages of the invasion.

“We must safeguard this cultural heritage,” says UNESCO Director-General Audrey Azoulay in the statement, “as a testimony of the past but also as a vector of peace for the future, which the international community has a duty to protect and preserve for future generations.”

The Story of Demeter and Persephone