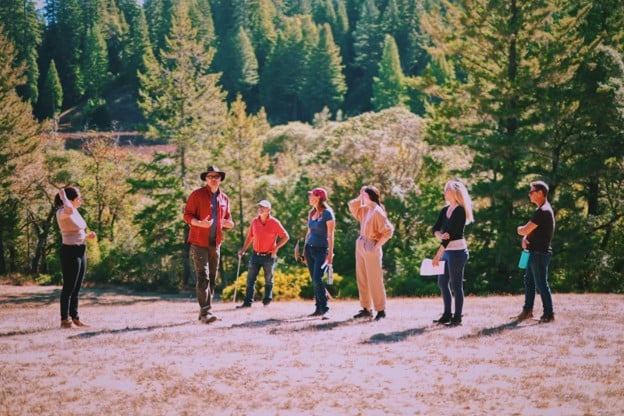 In their own words, Unconditional Freedom creates programs to “provide the reflection, nourishment and tools necessary to restore human dignity.” They tackle areas as varied as the environmental crisis and the prison system.

The group is also involved in work related to the restoration of ecosystems, feeding vulnerable communities, and fostering cultural creativity and spiritual growth.

Unconditional Freedom was established by a group of friends who left the major urban centers of the US for the natural landscapes of the Anderson Valley region of northern Mendocino County, California. In Anderson Valley, they were “seeking a lifestyle rooted in nature.”

In 2017, the group became conscious of the wildfires that were affecting the entire region. They felt that these effects were twofold. There was an obvious physical scarring of the natural environment but also an “impact on the human psyche.”

This got the founders of Unconditional Freedom thinking about the consequences of desertification and climate change both on the environment and on communities.

The group began with initiatives for ecological restoration and rewilding on their own 160-acre property. They then reached out to neighboring communities during the COVID-19 pandemic by baking bread for their neighbors and providing the homeless with food.

The group then started sewing masks to prevent the spread of infection in prisons. From this beginning, they developed the “Prison Monastery Program.” Through the project, the group aims to “demonstrate that the discarded humanity [they] found in jails could be restored to dignity through work and purpose.”

The documentary, Unconditional Freedom: At Home & In the World, was released on November 3rd. It is available on YouTube and on unconditionalfreedom.org.

The short film covers a range of the group’s projects in diverse but interrelated areas, including organic farming, feeding the hungry, environmental restoration, and prison reform.

The documentary features commentary by the team’s members as well as interviews with subject-matter experts. It takes viewers on a journey through four of Unconditional Freedom’s projects. These include the Earth Program, the Prison Monastery Program, Free Food, and Black Box.

Each of the four programs function as “systems for rehumanization.”

The documentary begins with an exploration of the Earth Program. The Earth Program is based on two farms in Northern California. It addresses environmental issues and the relationship between humans and nature.

Bob Wilms, one of the Earth Program directors, says, “Essentially, what we’re doing here is learning how to live with nature in such a way where we improve the life and the well-being of the land around us but it also gives us an outlet to express ourselves and develop a connection with nature.”

This segment of the documentary includes commentary by a number of subject matter experts. John Liu, an ecologist whose work has inspired Unconditional Freedom, says that “it’s not about institution building, [but] it’s about the empowerment of everyone to participate in restoring the Earth.”

In practice, this involves introducing prison inmates to contemplative practices, such as meditation and yoga. The workbook The Art of Soulmaking is made available to inmates as a tool for learning these practices and is now used in over seventy prisons across the US. The intention of the book is to help inmates rediscover their “unique genius” and “creativity.”

Inmates are also given the opportunity to grow their own food and prepare meals for other incarcerated residents.

Over the past two years, the Prison Monastery Program has been adopted by over 110 facilitates across the US. Over four thousand prisoners have taken part in the program the Art of Soulmaking.

The premise of Unconditional Freedom’s Free Food program is that “food is medicine” and that nutrient-dense farm food should be accessible. Meals are served in a “restaurant-type experience” to those who otherwise would not be able to afford them.

Over the course of a three-year period, more than thirty thousand people have received farm-to-table meals through the Free Food program.

According to Courtney Walker, who is a Black Box program manager, “Black Box uses the ideas of rehumanization and applies them to Black culture.”

“The ultimate goal is to restore ourselves, our communities, and the world,” Walker continues. In keeping with this theme, Matt Sherman, also a Black Box program manager, speaks candidly in the short film about how Black Box has helped him find a different perspective.

Ten of Greece’s Most Spectacular Monasteries

The Greeks of Bogota, Colombia

This Private Island for Rent in Greece is Heaven on Earth