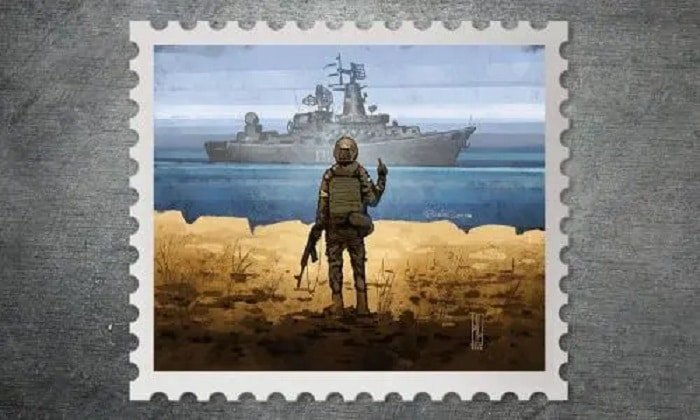 The “Russian warship, f— you!” postage stamp announced by the Ukrainian postal service Ukrposhta in March to honor the viral response of Ukrainian soldiers defending Snake Island, has eventually gone into circulation and is scoring high selling prices on ebay.

Ukrainian President Volodymyr Zelensky posed with a stamp book of the infamous stamps on Instagram shortly after their release.

He commented that the phrase “which became a symbol of the steadfastness of Ukrainian defenders, is now on postage stamps.”

“The sketch #3 by artist Boris Groh received the most votes and will soon be published by Ukraine’s state postal company”, she wrote at the time.

The illustration features an armed and armored Ukrainian soldier with his middle finger raised to a Russian vessel, while the yellow ground and blue ocean evoke the Ukrainian flag.

The ‘Russian Warship, F— You!’ stamp has attracted international interest since it went into circulation on 12th April.

Although one stamp block with six stamps in two different denominations sells for as little as 23 UAH (0.77 USD) and 44 UAH (1.83 USD) on the Ukraine Postal Service website, the selling price it can fetch on ebay is well in excess.

Listings for one stamp sheet range from 65 to 400 USD.

A listing for one stamp block of the lower denomination value appears to have sold over 3000 pieces by April 16, at 299 USD each.

On the first day of the Russian invasion of Ukraine, February 24, 2022, Snake Island, a Ukrainian island off Romania in the Black Sea -also known as Zmiinyi Island- was attacked by Russian Navy forces.

The attack was widely publicized when an audio clip of Ukrainian soldiers defying the Russian troops was shared online.

As the Russian ship identifies itself and tells the Ukrainians, “I suggest you surrender your weapons and capitulate, otherwise I will open fire, do you copy?”, an Ukrainian guard can be heard responding “Russian warship, go f— yourself.”

Here is the audio of the Snake Island encounter between Russian and Ukrainian navy vessels translated to English.

May the 13 brave Ukrainian heroes rest in power.

Although the Ukrainian soldiers involved in the incident were initially believed to be dead, the Ukrainian Navy later released a statement claiming that the troops were “alive and well” and in Russian captivity in Sebastopol.

On March 30, The Guardian reported that the soldier heard on the audio clip was released in a prisoner exchange, and subsequently awarded a Ukrainian medal.

By a strange twist of fate, the Moskva warship, which had been involved in the viral Snake Island exchange, exploded and burned off Odesa harbor on April 14.

Moskva was the flagship of Russia’s Black Sea fleet, leading its naval assault on Ukraine.

Ikaria, A Stunning Greek Island of Many Myths

Turkish President Erdogan to Have His Own Museum in Istanbul