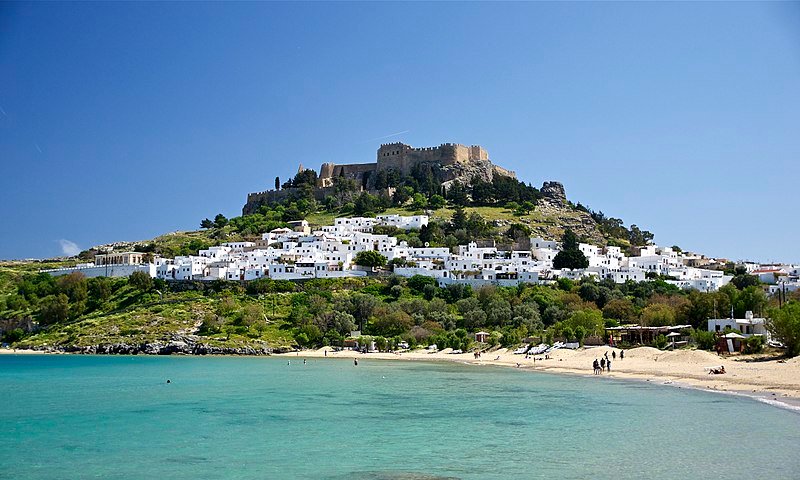 The company believes that 3 million tourists will come to Greece in 2022, which is double the 1.5 million travelers who visited in 2021.

That figure even exceeds the number of tourists who visited the country before the pandemic, in the record year for tourism in 2019.

The meeting between Mitsotakis and Joussen was held to discuss plans for the construction of a sustainable tourism laboratory on the island of Rhodes, called the Rhodes “Co-Lab.”

“One of our key priorities in our long-term tourism strategy is to extend the season. And we do think that many of our destinations, including Rhodes, have the capacity to also attract visitors outside the summer months,” Mitsotakis said of the plan after the meeting.

TUI and Greece to create sustainable tourism lab on Rhodes

Rhodes is an extremely popular tourism destination for many travelers, and particularly those who book their trips with TUI.

“You know how much we value our relationship as a country with TUI. I was looking at the numbers. Almost a million and a half visitors you brought to Greece, out of which I understand 600,000 came to Rhodes,” Mitsotakis stated.

“There’s a broader narrative that goes beyond tourism, I think Greece is a country that is clearly turning a page. It’s leaving behind a decade of crises, of pain. And I think it’s a country that is really looking to embrace the challenges of the future,” the Greek PM stated.

Greece has begun to shift toward sustainable and eco-friendly innovations in tourism, which is one of the country’s most important economic sectors.

Joussen shared Mitsotakis’ enthusiasm for the plan, and stressed the importance of tourism for many countries internationally:

“Tourism is a crucial sector for economic growth, development and prosperity for many countries in the world. It is a ‘force for good’…If you don’t have economic and social sustainability, you will not achieve ecological sustainability. If people don’t know how to participate in global wealth, if people don’t know how to have a decent earning, they will not take care of their surroundings, including the environment.”

The TUI CEO heralded the plan for creating sustainable tourism on Rhodes, stating:

“The Co-Lab can serve as a laboratory for sustainable tourism of the future and strengthen and further develop these impacts. It aims to create role models and blueprints for other destinations over the next five years.”

“In this decade of sustainable transformation, the Co-Lab aims to show how a holistic approach to greater sustainability can work – for the people who live in destinations, for travelers, the environment and for the tourism industry,” he said.

Special Forces From Greece, US and Israel in Joint Exercise “Orion”

The Australian Savior of Thousands of Pontian Greek Refugees

Barbados First Nation With an Embassy in the Metaverse

US Says Russia May Fabricate Pretext for Ukraine Invasion

Why Greek Orthodox and Western Easter will Never Coincide After 2700