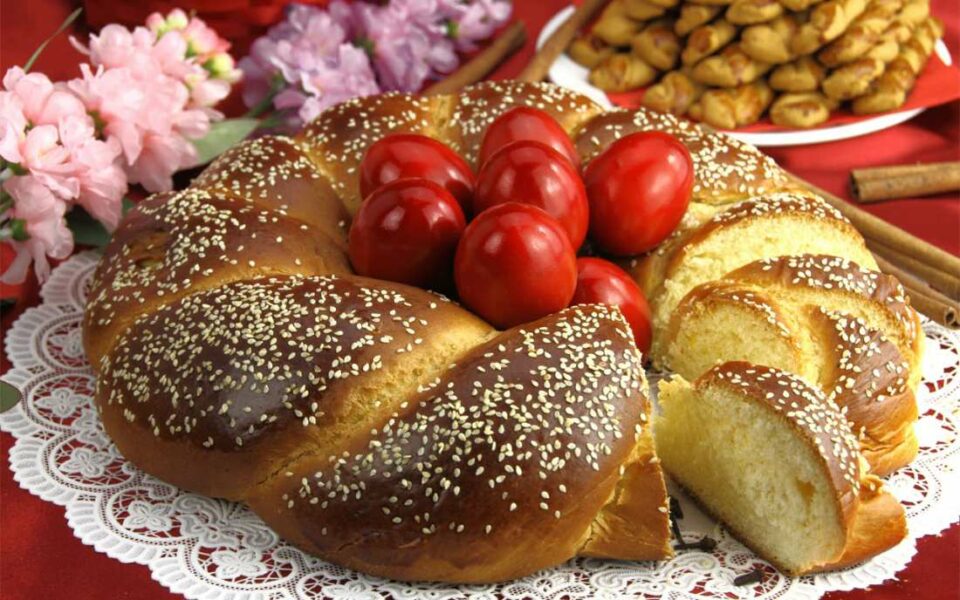 Tsoureki (τσουρέκι in Greek) is the traditional sweet yeast bread Greeks make every year on Holy Thursday, and eat on Easter Sunday.

Early in the morning on Holy Thursday throughout Greece, women start kneading the dough for the tsoureki.

Some bakers decorate the loaves with nuts and sugar. Depending on the shape and the region of Greece, tsoureki has different names, such as “kofinia,” “kalathakia,” “doksaria,” “avgoulas,” “koutsouna,” “kouzounakia” and so on. The most common shape for the ubiquitous bread is the braid.

The braids and knots, however, have their origin in pagan times, when certain shapes of the bread were meant to chase away evil spirits.

Tradition has it that the tsoureki symbolizes the Resurrection of Christ and rebirth in general as the flour is molded into shape and rises and takes on life as it transforms into its final shape.

The red-dyed egg which is usually placed on top of the braid symbolizes the blood of Jesus. Dying eggs red in anticipation of Greek Easter is one of the oldest and most beloved traditions in Greece.

Breads similar to the tsoureki were made in Byzantine times

Breads similar to the tsoureki were known to be made in Byzantine times. Called “kollyrides,” they were considered the special breads of Easter. They also had different shapes and had a red egg in the middle.

The name tsoureki comes from the Turkish word “corek” which refers to any bread made with yeast dough. There are many kinds of corek, both savory and sweet, which appear in various shapes and sizes depending on the region.

The word for the bread was adopted by Greeks during the Turkish occupation, and ever since then, Greeks began making their own version of the sweet bread, made with milk, butter, and eggs.

Armenians and people in Azerbaijan make a type of corek which is a round, flatbread sprinkled with sesame seeds.

Today, tsoureki has become an all-year-round pastry. It comes in various versions such as filled or covered with chocolate and nuts, and it can even be filled with custard or dipped in syrup.

Even eaten plain, this delicately sweet bread is delightful and refreshing after the long privations of the Lenten period.

Special Forces From Greece, US and Israel in Joint Exercise “Orion”

Greek Oscar Submission “Digger” To Be Distributed By Strand Releasing

Planet Survived its Dying Star: Lessons for the End of Our Solar System