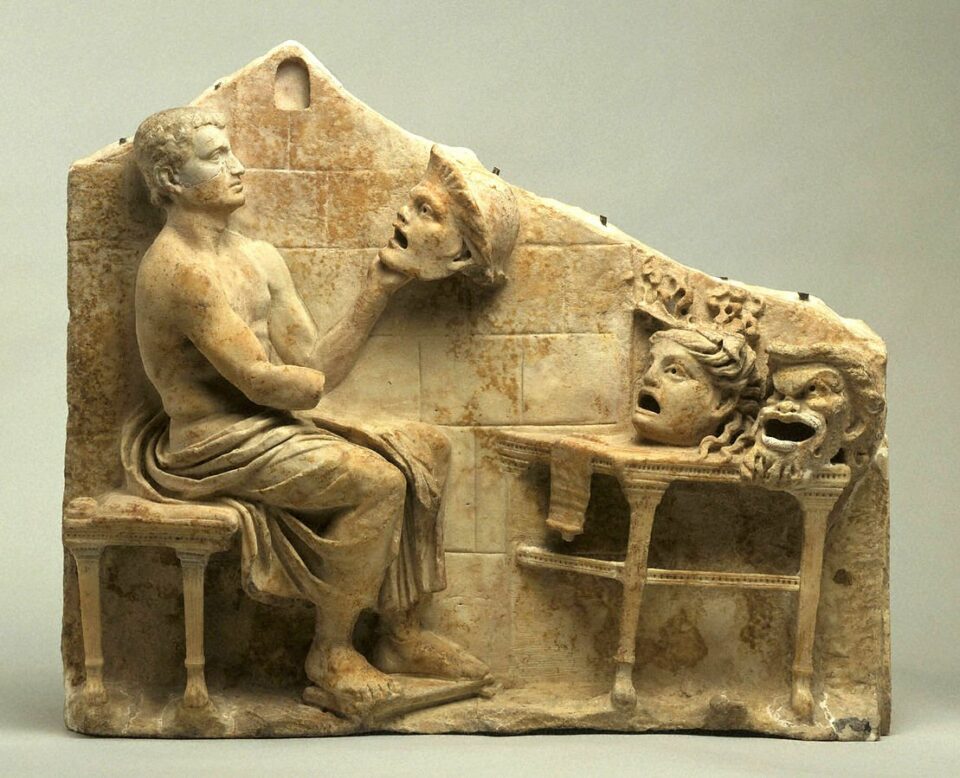 Aristotle of Ancient Greece gave much to human history. Yet, that legacy includes far more than just philosophy, for the famed polymath gifted us Thespis of Icaria as well, a name that might otherwise have been forgotten.

Two hundred years after the poet first stepped on stage, the founder of the Peripatetic School, an institution for the study of philosophy established around 335 BC, wrote about him in Poetics. This was fitting, as the Ancient Greek word “poietikos” (ποιητικός) translates to “pertaining to poetry,” “creative,” and “productive” all of which Thespis certainly was.

Aristotle, along with classical records, speaks of Thespis as being the first ever to step on stage. He was also the first tragedian, theatrical character, actor in written plays, and the originator of what we today call spoken poetry. Furthermore, he was the earliest to bring mythology to the boards, which we see in so many great operas today.

Originally, Thespis was a mere choir boy, who sang dithyrambs (songs about stories from mythology) for the public. He then apparently stepped away from the others in 534 BC to assume the role of one of the characters in the group’s choral performance of song and dance.

This was a bold move which later brought him to the attention of Aristotle. Aristotle credited Thespis with the transformation of the presentation of Ancient Greek legends. He also attributed the birth of tragedy to the Icarian, which derived from the dithyrambic poetry that he read.

The father of acting

Thespis wore masks to portray each character while the chorus to which he had once belonged remained unchanged.

What truly launched Thespis’ acting career was the Athenian Pisistratus, known to many for his military skills and tyrannical tendencies.

Despite that reputation, Pisistratus did one gracious thing. He rejuvenated the Dionysia, an important cultural festival held in Dionysus’ honor in Athens.

According to Ancient Athens, it was Pisistratus who in 534 BDE commanded Thespis and his troupe to perform there. When Thespis did, he left with the highest award for tragedy.

Yet, not everyone liked his performance. One such person was Solon, an Ancient Greek Athenian poet, lawmaker, and statesman. He is known in history as a reformer who attempted to save Athens from moral, political, and economic deterioration. His attempt at reform was, nevertheless, short-lived, though he is still considered the engineer of democracy in the archaic city.

Solon apparently wanted to know if Thespis “was not ashamed to tell so many lies before such a number of people,” as words would become the foremost critical review of theater.

Thespis supposedly replied that there was no harm by doing so in a play. At this point, Solon is said to have violently banged his walking stick while warning the tragedian that “if we honor and commend such play as this, we shall find it some day in our business.”

That did not stop Thespis from continuing to perform, however. Nowadays, that Ancient Greek theatrical spirit is kept alive at events such as the Athens and Epidaurus festivals. Moreover, Thespis remains known as the father of theater and acting in the Western world.

Vergina: Where Proof of Macedonia’s Greek Origin Was Uncovered

Mayor of Istanbul Imamoglu to Host Dinner for Christians

Zuckerberg Warns of Tech Meltdown; Has Harsh Message for Employees