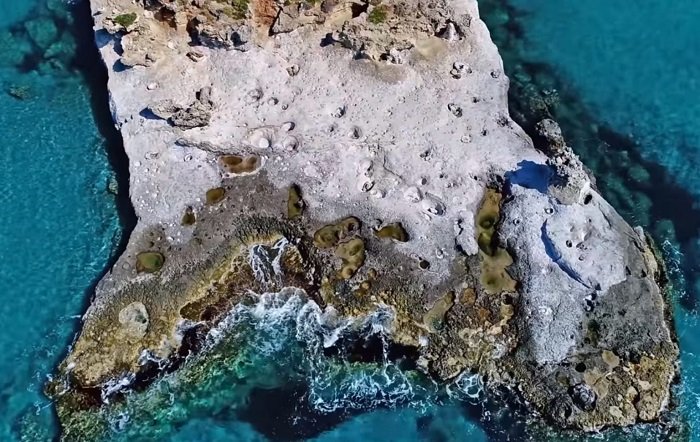 In Laconia in southern Greece, lies a rich geological museum of a petrified forest that dates back to between two or three million years ago.

In a large seaside area that extends from Agios Nikolaos, Agia Marina, Spitha, and Voies lie a little-known geopark.

Palm trees, conifers, and hardwood trunks ranging from 0.50 cm (.2 inches) to 1 meter 3.2 feet) in diameter were petrified due to various natural phenomena and then recalcified by the rise of the sea level.

The findings, unique in Europe, are priceless for scientific study.

The petrified palm forest in Greece

The uniqueness of the fossil forest, however, lies in the way all those trees were petrified: In contrast with other fossil forests around Greece, they weren’t pyritized, or mummified because of volcanic eruptions but fossilized through a different process, namely permineralization.

Million of years ago, when the climate in the area was sub-tropical, there was an extensive palm forest where palm trees coexisted with pines and other broad-leaved trees.

A violent flood, however (possibly due to volcanic activity) struck the area, and the forest was submerged in water. Most of the trees were destroyed, and their roots were covered by deposits, sand, pebbles, and other materials, mostly composed of calcium, from the seabed.

Over the flooded forest came various marine animals of newer geological age, among them mollusks, sea urchins, seashells, and crustaceans. Many of them were also fossilized later on and their fossils can be found for many kilometers along the coast of Cape Maleas.

The parts of trees however that were immediately covered by sand and calcitic deposits had a different fate. The plant tissues, under the influence of calcium carbonate, were gradually transformed to stone.

Unlike other types of fossils which are typically impressions or compressions, petrified wood is a three-dimensional representation of the original organic material.

Today, parts of the flooded area are on dry land once again, and the trees stand yet again under the Greek sun.

Archie Karas: The Greek Gambler Who Won $40M and Lost it All

Forbes’ Greeks and the Ten Richest People of 2022

Greek-Australians: One of Australia’s Most Vibrant Communities