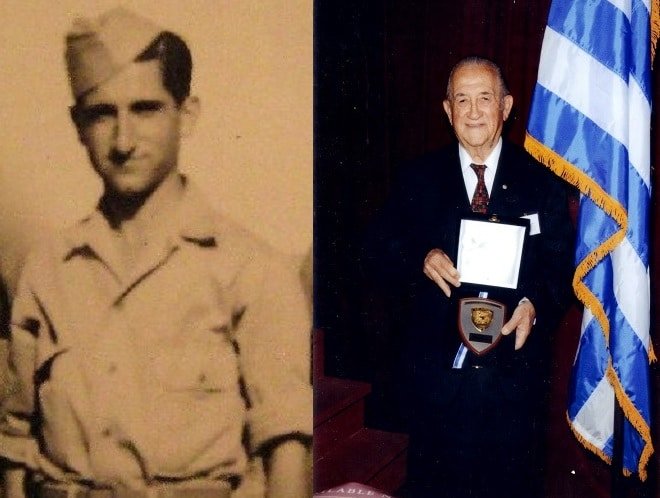 The story of Helias Doundoulakis is like a great war movie: The story of the Greek spy who helped Greece and the United States win the war against the Nazis.

A true hero, the Greek American worked as a spy during World War II and helped in the liberation of Crete and the eventual victory of the United States against Germany’s Nazi regime.

Furthermore, the story of Helias Doundoulakis is also the fascinating story of America’s first national intelligence agency, the Office of Strategic Services (OSS).

At the age of two, his family emigrated to Crete to care for his blind grandmother in Archanes. On May 20, 1941, when the Nazis invaded Crete, Helias was still in high school.

Helias’ older brother George worked as an interpreter for the joint Greek/British military headquarters. After the Battle of Crete was lost, the two brothers joined the Cretan Resistance.

Seeing George Doundoulakis’ leadership skills in the Resistance, “Monty” Woodhouse, a Special Operations Executive (SOE) agent, approached him and asked him to help evacuate British soldiers who were stranded on Crete.

Doundoulakis formed a network of spies by recruiting friends and ex-military officers and supplied intelligence to the SOE.

His brother Helias was assigned to the Heraklion Airfield, where he relayed to a nearby peanut vendor the number of Luftwaffe planes returning from Rommel’s Afrika Korps in Egypt.

The intelligence provided by Helias led to the sinking of a German convoy destined to resupply Rommel in 1942.

However, George’s network was betrayed to the Gestapo by a local Cretan after two years with the SOE. Helias and George were advised to flee and await exfiltration by the SOE.

After hiding in caves for a month, the Doundoulakis brothers were rescued by a British torpedo boat. Along with thirteen others, they were bound for Egypt.

After safely arriving in Mersa Matruh in Egypt, Helias, George, and four others were transported to an SOE villa in Cairo. The chosen group was destined for elite saboteur training.

The OSS, having been informed of the American brothers and their involvement with the SOE, dispatched OSS Captain James Kellis to recruit them.

The Doundoulakis brothers then enlisted in the United States Army on September 16, 1943, then joined the OSS, the newly-formed American intelligence service.

Prospective OSS agents were trained inside a well-equipped palace rented from Egypt’s ruling monarch, King Farouk. Helias was trained for six months in the arts of espionage in a facility known as the “Spy School,” by the Secret Intelligence Branch.

He also received advanced commando and parachute training by the British at their SOE training facility in Haifa, Palestine. Upon completion of his training in March 1944, Helias was dispatched on a mission to Thessaloniki.

There, Helias set up a phony business in a factory once owned by Greek Jews. From there he would send encrypted radio messages to OSS-Cairo on German activity — which he did from April to December of 1944.

In Thessaloniki, the Greek spy was of course never suspected of working for the Americans. At the same time, the Greeks did not know he was Greek, either. If Helias had been caught by the enemy, he was determined to kill himself with a cyanide capsule.

One of the messages he sent resulted in the destruction of a German troop train by a squadron of Allied B-25 bombers. For his service, Helias was awarded the Good Conduct Medal. He was also awarded the Legion of Merit.

After the war, space was the limit

After the war, Helias Doundoulakis returned to the United States. It was 20 years since he had left the land of his birth.

No longer working as a Greek spy, he settled in Brooklyn, New York, and after completing his duties in the U.S. Army, he went to college.

As a civil engineer, Doundoulakis worked on the design of the Pan Am Building (now the MetLife Building) in New York City while at Emery Roth and Sons. Emery Roth was known for designing the St. Moritz, now the Ritz Carlton, Hotel as well.

After that, the ex-spy was employed at Grumman Aerospace Corporation for over 35 years and was the group leader on many US Air Force and NASA projects.

These fascinating projects included the Apollo space missions, the Lunar Excursion Module, the F-14 Tomcat fighter jet, and the space shuttle. His design of the oxygen tanks on the ill-fated Apollo 13 mission was instrumental in the return of the Apollo 13 crew to Earth after their mishap in space.

Of a restless engineering mind, Doundoulakis patented the unique suspension system for a radio telescope used in the design for the Arecibo Observatory, the largest of its kind at the time, located in Puerto Rico.

He worked on this project with guidance from his brother George Doundoulakis who was the one to initiate the novel idea of Arecibo’s suspension system.

Helias Doundoulakis died on February 29, 2016. He was buried with military honors next to his brother George in Greenfield Cemetery in Uniondale, New York.

The National Hellenic Museum recently honored the great Greek-American in a new exhibition called “Becoming a Spy: Helias Doundoulakis, the OSS, and the Second World War.”

Greece – USA Ties “Stronger than Ever”, Biden and Mitsotakis Affirm