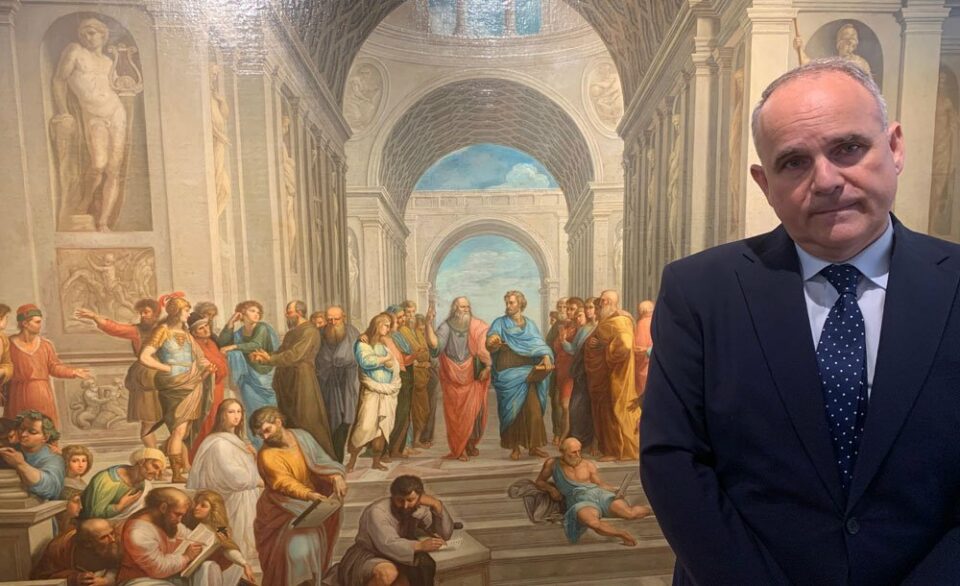 The Philhellenism Museum in Athens presents the evolution of philhellenism from the Renaissance to the present day with an emphasis on its contribution to the War of Independence.

The Museum supports classical education and the evolution of humanity on the basis of the values ​​of Greek culture and continuous philhellenism and also hosts collections which document the impact that Greek and culture and civilization had on the arts, politics, creativity, and social progress.

The Museum is housed in a privately owned building at 12 Zisimopoulou Street, 11524, Athens, Greece.

There is also a special exhibition entitled  “The American Philhellenism”  featuring unique artifacts and historical documents capturing the birth and evolution of philhellenism, U.S. support for the Greek Revolution, and the impact of Greek culture on the values, institutions, artistic, and architectural expressions in the U.S.

The fourth floor specifically highlights the relations that the American revolution had with the Greek one and presents the portraits and the contribution of significant American philhellenes.

It also highlights the impact that the Greek Revolution had on the struggle for the abolition of slavery and human rights. Finally, it depicts the influence of Greek culture and the Athenian democracy on the political system and architecture in the USA.

The founder of the Philhellenism Museum

The founder of the museum, Konstantinos Velentzas, demonstrated exclusively to Greek Reporter the most important exhibits and analyzed the great role of the Americans in the success of the Greek Revolution.

“There are many things in common between the Greek and the American Revolution, as their purpose was the creation of a nation-state, as it happened. We should not forget that the first frigate of the Greek navy, ‘Hellas,’ was manufactured in the USA” Velentzas states.

He adds that a lot of philhellenic committees in various US cities such as Boston and New York collected philanthropic aid and items to assist Greece and that many American volunteers fought alongside Greek rebels.

“On the other hand, the Greek revolution had a great contribution to human rights, as it sensitized public opinion in matters like slavery, and it was the triggering element for the USA to start working for the abolition of slavery. Of course, the fathers of the American Nation were influenced by classical Greece,” he adds.

According to Velentzas, the day that New York learned of the victory of the Christian fleet against the Ottomans in Navarino Bay in 1827, the whole of New York City celebrated the news.

The most important figures of American philhellenism are the following:

Everett, Edward (1794-1865) Everett was an American philhellene from Boston and a professor of Harvard beginning in 1814. He served as Massachusetts MP, senator, and governor. Later on, he was Secretary of State in the USA, as well as founder and general secretary of the Boston Philhellenic Committee. He was the heart and brain behind the philhellenic movement in the USA and wrote numerous articles in favor of the Greek Revolution. Furthermore, he contributed to fundraising drives in support of Greece.

Jarvis, George (1797-1828) An American philhellene from New York and hero of the Greek Revolution, Jarvis was the son of an American merchant and diplomat in Denmark. He arrived to Greece in 1822 and participated in many naval battles right up until December 1823; he was appointed chief of staff of Lord Byron’s corps in Missolonghi. After Byron’s death, he formed his own unit of 40 fighters which he financed personally. In 1825, he was captured by the Turkish forces and served under Theodoros Kolokotronis after his release until January 1827 when he was placed in the staff of Georgios Karaiskakis with the rank of major general. After the Battle of Analatos in May 1827, he returned to the Peloponnese. He died of typhus in Argos on August 11, 1828.

Miller, Jonathan Peckham (1797-1847) An American philhellene and officer of the US Army, Miller came to Greece in November 1824 to defend Missolonghi during its second siege and fought bravely in the Battle of the Lerna Mills (June 13, 1825). He served in the Greek Army with the rank of colonel during the Greek Revolution. He wrote a book and promoted the Greek positions in the USA with letters and articles to the press and was responsible for the distribution of American financial aid to Greece.

Howe, Samuel Gridley (1801-1876) An American philhellene from Boston, Howe was also a doctor, educator, and lawyer. He was a Brown University Law School and Harvard Medical School graduate (1824). He came to Greece, where he received the nickname “Lafayette of the Greek Revolution in mid-1824.” Howe participated in many battles and later served as chief doctor on “Karteria,” the first steamship of the Greek Navy in 1826 and 1827. He published his book Historical Sketch of the Greek Revolution at the end of 1828 with which he informed Americans about the situation in Greece and collected $60,000 through extensive fundraisers.

Howe used this money to provide food, clothing, and shelter Greek refugees and built the port of Aegina. He also founded the colony Washingtonia for Greek refugees from Asia Minor, Crete, Syros, and Athens in Corinth. Howe returned to Boston in July 1832, founded the Perkins Institution and Massachusetts Asylum for the education of the blind and actively supported the abolitionist movement. He traveled to Greece for the last time in 1866, carrying supplies for the relief of the Cretan refugees during the Cretan Revolution (1866 – 1869) against the Ottomans.

Howe, Julia Ward (1819-1910). Wife of the American philhellene Samuel Gridley Howe, Julia Ward Howe supported the Greek War of Independence during the revolution in Crete. She founded the Greek Relief Committee and raised funds and aid for Greece. In a single major event organized by her with the participation of prominent musicians in Boston, she raised 2,000 thalers, which were then sent to Greece. She even penned a poem for Greece. Julia Ward Howe later visited Greece with the Howe family and helped Cretan refugees.

Marbois-Lebrun, Sophie de / Duchess of Placentia (1785-1854) French-American philhellene and philanthropist who supported the Greek Revolution, the Duchess and her daughter offered 23,000 francs for the needs of the military in Greece in 1826 and another 1,800 thalers a little later. Later on, she relocated to Greece and offered valuable economic and social contribution to the newly established Greek state.

Williams, James Jakob (dates of birth and death unknown) African-American philhellene from Baltimore, Maryland and former US Navy Marine, Williams was distinguished for his participation in the US-Algerian War of 1815 under the command of the American admiral Stephen Decatur. He arrived to Greece in January 1827 and served as the assistant of the British philhellene admiral Thomas Cochrane until December 1827. He fought bravely and was wounded in Nafpaktos.

Washington, William Townsend (1802-1827). An American philhellene from Virginia and a relative of the first US President, George Washington, William Townsend Washington was lieutenant of the 4th Artillery Regiment of the US Army. He arrived to Greece in June of 1825 as an envoy of the Boston Philhellenic Committee and proposed the creation of a Foreign Legion to further strengthen the struggling Greeks. Washington participated in battles against the Ottomans in the area of Nafplio. He later played a conciliatory role between the opposing factions of the Greek revolutionaries. Washington was killed in battle in Nafplio on July 16, 1827.

Who Beheaded The Kritios Boy, the Masterpiece of Ancient Greek Art?

TUI Aims to Double Tourism to Greece in 2021