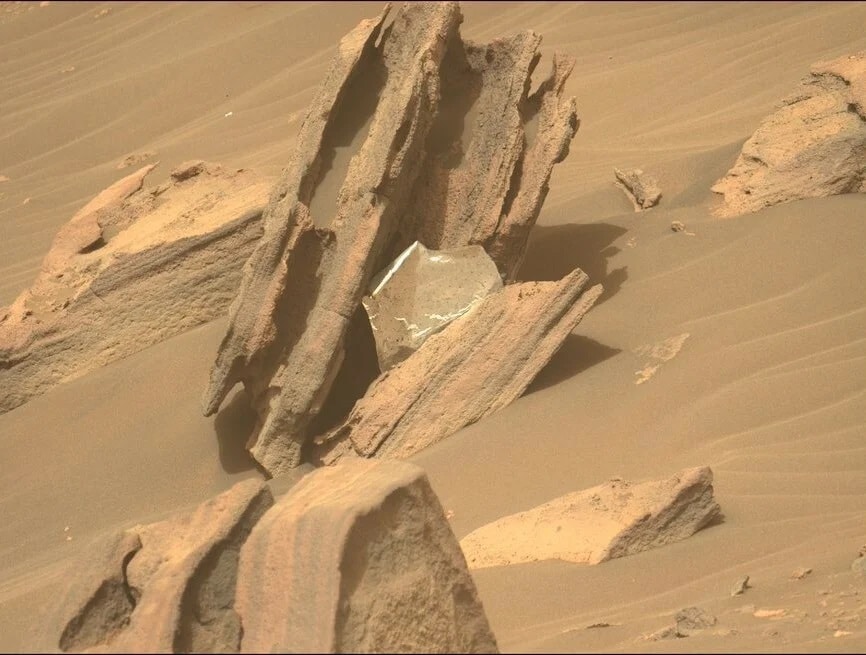 NASA’s Perseverance rover recently spotted on Mars trash – a piece of a thermal blanket used to protect the spacecraft during its landing on the red planet.

The material the space agency used to protect the Perseverance spacecraft from extreme temperatures as it journeyed to Mars and plummeted through the Martian atmosphere was caught in a jagged rock.

“My team has spotted something unexpected: It’s a piece of a thermal blanket that they think may have come from my descent stage, the rocket-powered jet pack that set me down on landing day back in 2021,” NASA tweeted from the Perseverance rover account on Wednesday.

How did the trash end up 1,2 miles away from the Mars crashing site?

A looming question is how the foil-like debris found its way to this region in Mars’ Jezero Crater, some two kilometers (1.2 miles) from where landing gear (the “rocket-powered jet pack”) crashed in the Martian desert.

“Did this piece land here after that, or was it blown here by the wind?” the space agency wondered.

That shiny bit of foil is part of a thermal blanket – a material used to control temperatures. It’s a surprise finding this here: My descent stage crashed about 2 km away. Did this piece land here after that, or was it blown here by the wind? pic.twitter.com/uVx3VdYfi8

The Perseverance rover expertly landed on Mars in February 2021. On its way down, the spacecraft holding the rover ditched a variety of instruments and objects, including a heat shield, a supersonic parachute, and a rocket-powered sky crane that lowered the rover to the ground.

The car-sized robot has already rumbled by its jettisoned parachute, so it’s not terribly surprising the rover now stumbled by more landing debris.

Perseverance, nicknamed Percy, is designed to explore the Jezero crater on Mars as part of NASA’s Mars 2020 mission. It was manufactured by the Jet Propulsion Laboratory and launched on 30 July 2020, at 11:50 UTC. Confirmation that the rover successfully landed on Mars was received on 18 February 2021, at 20:55 UTC.

As of 18 June 2022, Perseverance has been active on Mars for 471 sols (485 Earth days) since its landing. Following the rover’s arrival, NASA named the landing site Octavia E. Butler Landing.

Perseverance has a similar design to its predecessor rover, Curiosity, from which it was moderately upgraded. It carries seven primary payload instruments, nineteen cameras, and two microphones.

The rover also carried the mini-helicopter Ingenuity to Mars, an experimental aircraft and technology testbed that made the first powered flight on another planet on 19 April 2021.

As of April 21, 2022, it has made 26 successful flights. Ingenuity’s 25th successful flight, which occurred on April 8, 2022, saw the helicopter set new records for highest speed and distance traveled during a single flight.

The rover’s goals include identifying ancient Martian environments capable of supporting life, seeking out evidence of former microbial life existing in those environments, collecting rock and soil samples to store on the Martian surface, and testing oxygen production from the Martian atmosphere to prepare for future crewed missions.

Many Vacation Destinations in Greece Too Expensive for Locals

Hotel Room in Ibiza Completely Free, But Everyone Can See You