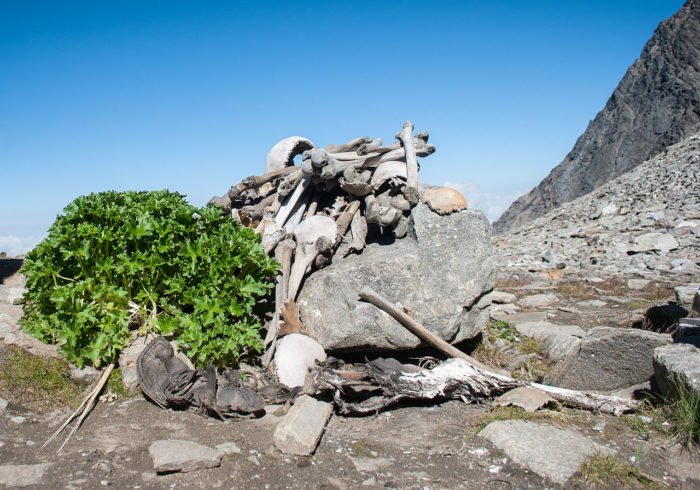 Researchers have determined that skeletons found at Roopkund Lake in India belonged to Greeks, as stated in the astounding results of their investigation into these mysterious human remains.

The skeletons, discovered at Roopkund Lake, which sits at an altitude of approximately 5,000 meters, or 16,404 feet, were analyzed using DNA to finally determine the ethnic origin of the people they may have belonged to.

In a stunning turn, according to these results, the first group of skeletons appear to have belonged to people originating from the Eastern Mediterranean.

The researchers found that the DNA of the skeletons is similar to the genetic makeup of Greek people who currently live on Crete and on the mainland of Greece.

The second group of bones which was found in the same area are far older, and date all the way back to the year 800 AD.

The DNA of the second group of skeletons matches that of people from South Asia, including modern Indians and Pakistanis.

A local legend, which persisted long before the skeletons were found, claims that a group of people on a pilgrimage to a holy site were killed at the lake during a heavy hailstorm in the ninth century.

The dating of the skeletons to 800 AD could lend credence to the once-mythic story.

There is no local legend about a group of Greeks visiting the area in the 19th century that could help solve the mystery, however.

The scientists, who recently published their unusual findings in the magazine Nature, have unfortunately not managed to determine the reasons why a group of people came from modern-day Greece to visit an area located at such a high altitude.

They have also not been able to come up with a hypothesis to explain the reasons why they all died in such close proximity to each other, or why their bodies at least were placed so near each other.

Thirteen out of the total fourteen skeletons in the first group are believed to have belonged to Greeks who were alive at about the same time.

The analyses also revealed that the group of Greeks had all been healthy before they all mysteriously died, under circumstances which may never become known.

Roopkund Lake, located in the Indian state of Uttarakhand, is a favorite destination for those who visit northern India. It is also known as the ”Mystery Lake” or the ”Lake of Skeletons” because of the number of skeletons that have been found in the region.

Why is the U.S. Pulling the Plug on the EastMed Pipeline?

Ancient Greek Story of Antigone Warns Against Sin of Pride

Pfizer: Omicron Vaccine Will be Ready in March

Why do Leaves Change Color in the Autumn?