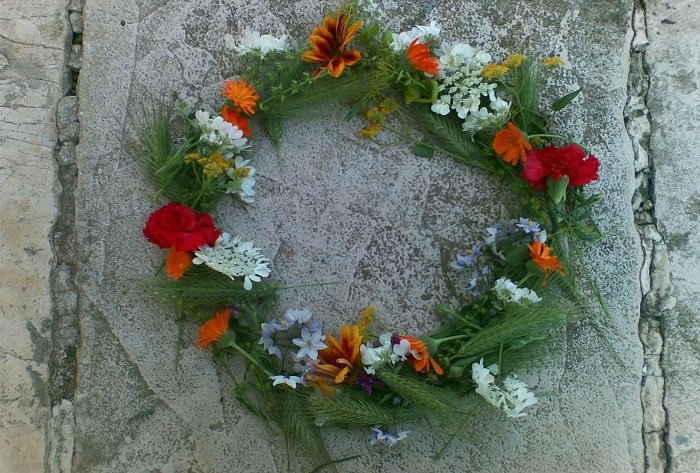 Maios (Μάιος in Greek), the month of May, took its name from the ancient goddess Maia (in Greek Μαία, the mother, the midwife, she who helps to give birth. Maia was the Greek goddess of fertility.

The first day of Maios (Πρωτομαγιά in modern Greek) celebrates the final victory of the summer against winter, the victory of life against death. The celebration is similar to an ancient ritual associated with another minor demi-god, Adonis, which also celebrated the revival of nature.

The celebration of Spring in ancient times was in association with the Anthesteria, a festival held in February and dedicated to the goddess of agriculture Demeter and her daughter Persephone.

Persephone emerged every year at the end of Winter from the Underworld. The Anthesteria was a festival of souls, plants and flowers, and Persephone’s coming to earth from Hades marked the rebirth of nature, a common theme in all these traditions.

What remains of the customs today, echoes these traditions of antiquity. A common, May Day custom involved the annual revival of a youth called Adonis, or alternatively of Dionysus, or of Maios (in Modern Greek Μαγιόπουλο, the Son of Maia).

In a simple theatrical ritual, the significance of which has long been forgotten, a chorus of young girls sang a song over a youth lying on the ground, representing Adonis, Dionysus or Maios. At the end of the song, the youth rose up and a flower wreath was placed on his head.

May Day and the wreath in Thargelia

Other experts trace the May Day celebration and the wreath in the Thargelia (in Greek Θαργήλια), one of the chief Athenian festivals in honor of Apollo and Artemis, held on their birthdays, the 6th and 7th of the month Thargelion (about May 6 and May 7).

Thargelia included a purifying and expiatory ceremony. People offered the first-fruits of the earth to the god in token of thankfulness, it was at the same time necessary to propitiate him, lest he might ruin the harvest by excessive heat, possibly accompanied by pestilence.

The purificatory preceded the thanksgiving service. A wreath was made using twigs from fruit-bearing trees, like fig trees, almond trees, or peach trees.

The most common aspect of modern May Day celebrations is the preparation of a flower wreath from wild flowers, although as a result of urbanization there is an increasing trend to buy wreaths from flower shops.

The flowers are placed on the wreath against a background of green leaves and the wreath is hung either on the entrance to the family house/apartment or on a balcony.