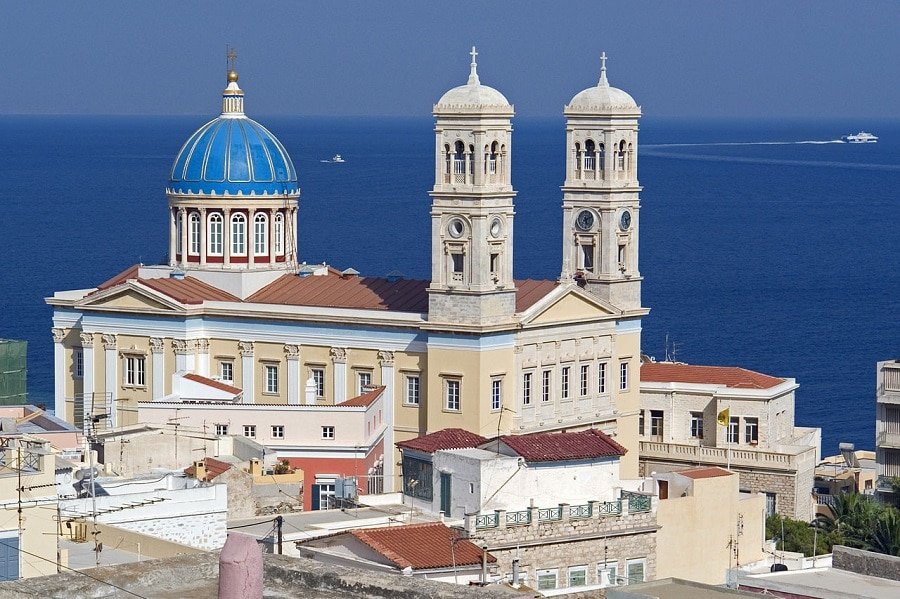 The Church of Saint Nicholas, a magnificent church in Ermoupolis, the capital of Syros island, took 22 years to build.

Overlooking the Cycladic island, Saint Nicholas’ construction began in 1848, according to the designs of a Greek architect named G. Metaxas. They were approved personally by King Otto, the Bavarian prince who ruled Greece from the establishment of the monarchy in 1832. The church was finally completed in 1870.

Saint Nicholas, the patron saint of seafarers, is also the patron saint of Ermoupoli. The cathedral dedicated to him stands out even today for its impressive architectural structure. The two-story monumental church has marble bell towers, an imposing marble staircase and marble propylaea, Ionic columns, archaic motifs, arcades, and an array of sculpted decorations.

It has lavish interiors including its icon of Saint Nicholas, which was plated in silver in Moscow. Its marble throne, pulpit and marble iconostasis are also very unusual in Greek ecclesiastical architecture.

Saint Nicholas Church considered one of the finest in Greece

St. Nicholas was constructed between 1883-1899 by Tinian sculptor G. Vitalis and is considered one of the finest churches of the nineteenth century in Greece.

The church’s icons were created by some of the best hagiographers of the time while many Greeks from abroad, as well as shipowners, contributed funds toward the construction of the temple.

The imposing church is known as Agios Nikolaos “the rich,” to distinguish it from “Agios Nikolaos of the poor” another church on Syros.

Syros has a long history that began three millennia ago. This explains the many different styles of architecture and the many government buildings in the capital, Ermoupoli. It also has led to the establishment of a wealth of museums and cultural events that take place there in the Summer.

On Syros, one will find the City Hall, the remains of the castle in Ano Syros and the Theater Apollon — all buildings that are atypical for Cyclades architecture.

Syros was never under Ottoman occupation, since it was protected by the French, and there is a strong Catholic element on the island due to the Venetian influence there as well.

Greek PM Apologizes for Blizzard Fiasco; Opposition Calls on Him to Resign