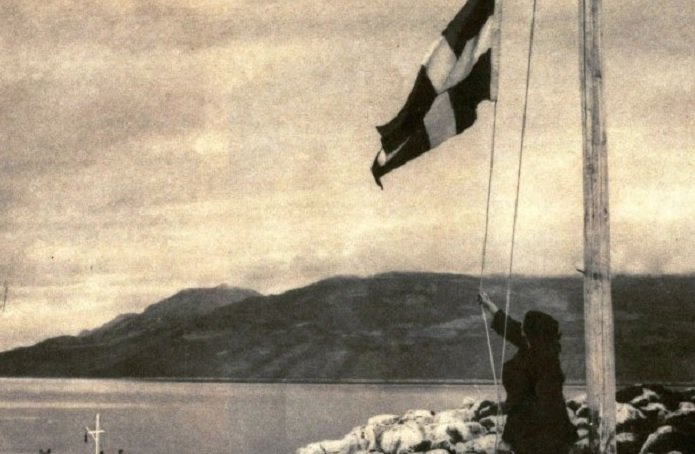 The “Lady of Ro”, Despina Achladioti, was the woman who lived alone on the remote island, a stone’s throw away from the Turkish coast, and has become a symbol of patriotism and Greek defiance by raising and lowering the Greek flag every day for decades.

Her small daily act of patriotism has seen her compared to France’s Joan of Arc or Britain’s Boudicca. She became known in Greek collective memory as the “Lady of Ro.”

“Μost people live their lives without a purpose. Despina Achladiotou’s life has a purpose: to let passing ships know the islet of Ro is Greek. As soon as she spots a ship, she runs to the mast that has been set up on the beach, and raises and lowers the Greek flag several times. And the ship, according to the international courtesy rules of the sea, raises and lowers its own flag.”

These were the opening sentences of the April 1956 article in “Eikones” magazine, which made the “Lady with the Flag” famous across the nation.

Achladioti, born in 1890 on Kastellorizo — then a part of the Ottoman empire and only kilometers from the Turkish coast — lived a hard life on the small, rocky outpost.

In 1927 she sailed with her husband to the even smaller island of Ro, next to Kastellorizo, where they eked out a living on the deserted rock, living off subsistence farming. No one actually knows why they chose to live there alone.

However, after her husband died in 1940, Despina continued to live her life on Ro — just 800 meters from the Turkish coast — joined only by her blind mother, who sailed from Kastellorizo.

Even though Ro — named after the Greek letter for its distinctive shape — did not formally join the Greek state until 1947, as the Dodecanese were controlled by Italy, Despina would raise and lower a Greek flag every day.

She did this every day as her home island of Kastellorizo was invaded by the Italians, bombed by the Luftwaffe and its 14,000 or so inhabitants were evacuated by the British.

This small act, which she carried out every day of her lonely life on Ro in all types of weather, was recognized by the Greek state upon her death on May 13, 1982, when she was buried on the island with full military honors.

That military tradition continues, with Greek soldiers stationed there raising and lowering the flag every day, come what may.

The “Lady of Ro,” as Despina is known, embodies a spirit of pride, determination and resistance with which many Greeks identify strongly. Her image is used to summon up a spirit of national pride which has become ubiquitous across the diaspora.

It’s a worldwide legacy which the lady herself, who barely strayed in her long life from two tiny islands in the Mediterranean, would struggle to even comprehend.

Thousands of Americans Volunteering to Fight in Ukraine

Karagiozis: The Puppet that Raised Generations of Greeks