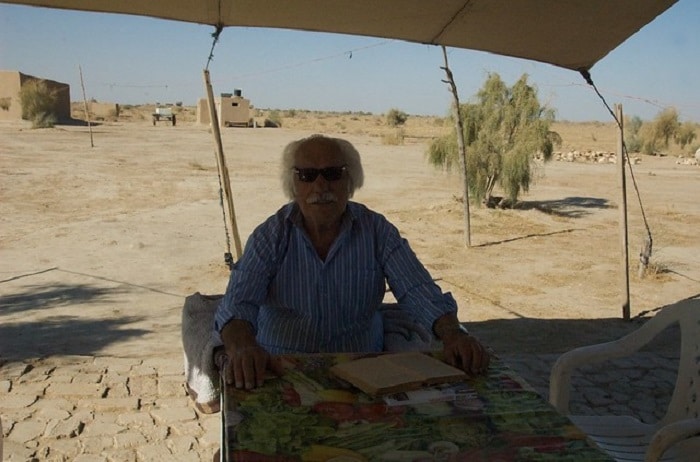 Prominent Russian archaeologist of Greek-Pontic descent Victor Sarigiannidis is the man who discovered the ancient city of Bactria.

Sarigiannidis has been described as a “poet of archeology,” “the man who walked in the steps of Alexander the Great in Central Asia” and a “hero of Pontian Hellenism.”

The Greek archaeologist spent decades in the deserts of Turkmenistan and Afghanistan, where he brought to light entire cities with wonderful culture and wealth.

With the discovery of Bactria and the findings of the necropolis of Gonur Tepe, Victor Sarigiannidis proved that Hellenism spread in the area 1,600 years before the campaign of Alexander the Great.

The evidence supports the theory of the connection of the culture of Oxus River with the Minoan-Mycenaean culture.

At the same time, he developed the theory that Zoroastrianism first appeared in this area in palaces and altars accompanied by signs of fire worship.

Life and Work of Victor Sarigiannidis

Victor Sarigiannidis was born on September 23, 1929 in Tashkent — then Soviet Union, now Uzbekistan — to Greek parents.

In 1952 he graduated from the Central Asian State University (Tashkent) and in 1961 received a master’s degree in Near and Middle Eastern Archeology from the Moscow Institute of Archeology.

From 1949 and on he played an active role in archaeological excavations in Central Asia and Afghanistan. There, he brought to light the Royal Necropolis of Tilia Tepe (1st century AD).

In Tilia Tepe, more than 20,000 gold objects were found. This was considered the “discovery of the century.” The findings were housed in the State Museum of Afghanistan.

However, during the wars in the area, all the findings were stolen between 1991-1993 and since then their whereabouts are unknown.

The findings in the “golden tomb” proved the existence of cultural influences from various regions such as Greece, Iran, India, Egypt, China and Siberia.

For example, Aphrodite with wings and a dot on the forehead is one of the elements that revealed a wide meeting of cultures, such as Greek, Indian and local that worshipped winged deities.

The Hellenistic kingdom of Bactria — or Greco-Bactrian Kingdom as historians call it —  flourished in the area for two centuries after the death of Alexander the Great.

In the last 30 years of his life, Victor Sarigiannidis made the largest archaeological excavations in the Karakum Desert in Turkmenistan.

There he discovered the Margian Kingdom (end of the 3rd millennium BC) completely unknown to the international scientific world.

The Greek archaeologist introduced a new theory to the formation of the early Hellenistic culture in Central Asia and the existence of a culture identical to that of Bactria, which is also associated with the Minoan-Mycenaean culture.

Overall, Sarigiannidis contributed decisively to the emergence of elements of Greek culture in the wider Black Sea region and also to the discovery of Greek roots in present-day Afghanistan, Turkmenistan and Uzbekistan.

With his findings, Victor Sarigiannidis proved that Hellenism spread to the East and Central Asia 1,600 years before the campaign of Alexander the Great.

Honors and disappointment with the Greek State

For his work, Sarigiannidis was awarded the title of Doctor of Historical Science from the Russian Academy of Sciences in 1975.

In Greece, Victor Sarigiannidis, received Greek citizenship in 1997 and was awarded with the Golden Cross of the Order of Honor of the Hellenic Republic in January 2002.

His writing was particularly rich, with 20 books in Russian, which have been translated into English, German, Japanese and Greek. More than 200 of his articles have been published in prestigious international scientific journals.

Coming to Greece in the mid-1990s, he received many promises from the Greek state for financial support in order to continue his work, but he was disappointed by the behavior and indifference of those in charge.

Later, the promises of then prime minister Kostas Karamanlis (2004-2009) were never kept. In 2005, after years of efforts, he received a meager pension from the Greek state, amounting to 192 euros per month.