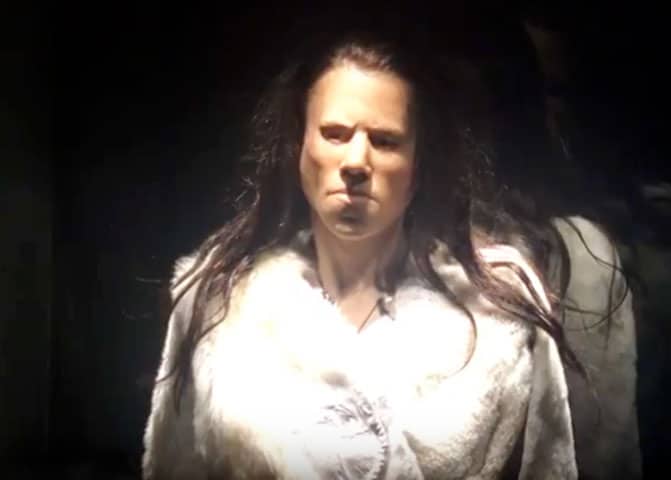 The reconstructed face of Avgi, a teenager who lived in Mesolithic Greece, around 7,000 BC, stunned viewers in the amphitheater of the Acropolis Museum when unveiled in 2018.

Through modeling the face of the young girl, scientists have allowed the public to look into the eyes of a person who walked the earth nine thousand years ago.

The Mesolithic period in Greece

In Europe, the Mesolithic era lasted from 15,000 BC to about 5,000 BC, and is marked by a turn toward a hunter-gatherer way of life, and the use of stone tools.

In some areas, there are remnants of pottery, ceramics, and textiles in Mesolithic culture, indicating the coming Neolithic period, when humans began to create settlements and cultivate the land using agriculture.

Avgi’s remains were found in 1993 in one of the most important ancient sites in Greece, Theopetra cave. She was named Avgi, which means dawn in Greek, because she marks the dawn of civilization in Greece.

According to archaeologists, the cave is likely to be the place of the oldest human construction on earth, as findings indicate that the shelter was inhabited as early as 130,000 years ago.

Excavations at Theopetra began in 1987 under the direction of the archaeologist Dr. Catherine Kyparissi-Apostolika, honorary head of the Ephorate of Palaeoanthroplogy and Speleography of Greece’s Ministry of Culture and Sports.

Theopetra Cave is home to one of the longest archaeological sequences in the entire country, as remains of Paleolithic, Mesolithic, and Neolithic cultures have all been found there.

Once her bones were recovered, they were subject to extensive testing and analysis.

According to the results of her bone analysis, Avgi was thought to be around 15 years old, but dental tests showed that she may have been 18.

Bone samples indicated that during her life, Avgi was likely anemic, and may have suffered from a few vitamin deficiencies.

Avgi is the second creation of orthodontist Manolis Papagrigorakis, associate professor of Athens University, following the 2010 reconstruction of the face of Myrtis, the 11-year- old girl who lived and died of typhoid fever in Athens of the 5th century BC.

He worked with an international team of forensic anthropologists and other experts in human facial reconstruction at a laboratory in Sweden to recreate Avgi’s face.

Even radiologists, endocrinologists, orthopedists, and neurologists were included on the reconstruction team to produce the most accurate result.

The team of experts was aided in their effort to reconstruct the centuries-old face of the teenager, as her skull and teeth were extremely well preserved and almost completely intact.

After taking extensive scans and X-rays of her skull, experts slowly built up her facial features using clay.

A Magical Getaway to the Aegean Island of Halki