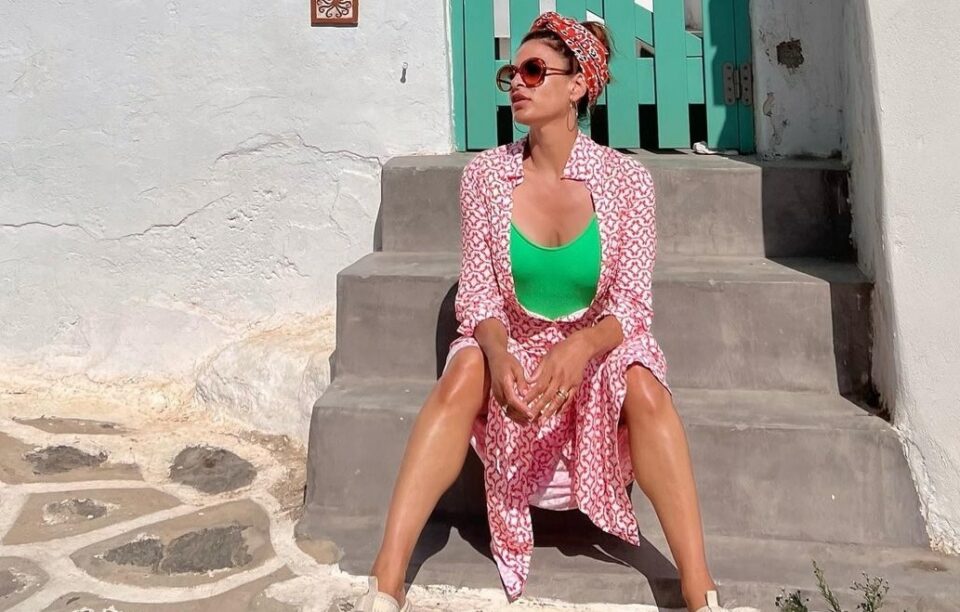 Eva Mendes took to Instagram to post pictures of her vacation to Greece with her partner Ryan Gosling and her two daughters, Esmeralda, who is seven years old, and Amada, who is six years old.

One of the pictures showed Mendes sitting in front of a traditional Greek home on the cosmopolitan island of Antiparos, where several Hollywood stars including Tom Hanks and Rita Wilson have holiday homes.

Mendes sat in the beautiful Greek sunlight and basked in its glory while fans went crazy in the comments section of the post. “Enjoy your holidays Eva. You look stunning as always …kissed by the sun,” one said.

In another photo posted on Instagram Mendes is seen sitting in a Greek restaurant.

Mendes began dating Gosling shortly before they starred together in The Place Beyond the Pines.

The Hollywood pair have chosen the Greek island for their vacation gateway. Mykonoslive-tv reports that the family is keeping a low profile on Antiparos.

Eva Mendes was described as among the most beautiful Latin women

The 48-year-old Mendes has been described by world media as one of the world’s most beautiful Latin women, and she has often been considered a sex symbol.

She once embraced that status, saying it was “partially self-created […] I think at times I play up my sexiness. And there’s times where I don’t,” though she does not let it interfere with her film work: “I like it when it doesn’t limit my career. It’s a part of my life, but on a secondary plane.”

Mendes has appeared in several music videos for artists like Will Smith and has also been an ambassador for brands, including Calvin Klein, Cartier, Reebok, Pantene shampoo, Morgan and Peek & Cloppenburg.

Mendes has not appeared in a film since 2014.

Restrooms Found in 2nd-Century BC Theater in Smyrna

Israeli President to Visit Greece, Cyprus Ahead of Erdogan Meeting

U.S.- Greece Ties “Stronger than Ever”, Biden and Mitsotakis Affirm

US Warns that Russia Could Invade Ukraine “At Any Time”