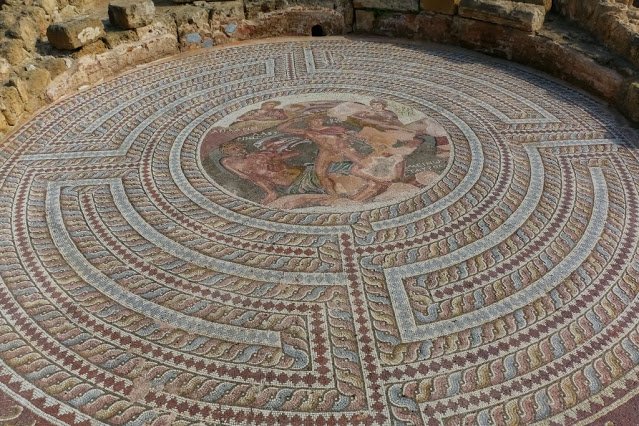 A spectacular ancient mosaic floor that was part of a building from the Hellenistic period is among the important finds from excavations carried out recently at Fabrika Hill in Kato Paphos, Cyprus.

Known to archaeologists as the “Acropolis of Paphos,” the Hill holds treasures that have been the focus of archaeologists from France’s University of Avignon for the past twelve years.

The finds unearthed at the site were presented to the Paphos Municipal Council recently by Claire Balandier, a professor of archaeology and ancient Greek history and head of the Archaeological Mission of the University of Avignon.

Balandier, who has served as chief of the archaeological expedition conducting excavations on site for more than a decade, told the authorities the Fabrika Hill area was considered the Acropolis of Paphos and still holds extremely important monuments from the ancient history of the area.

Phedonas Phedonos, the mayor of Paphos, thanked Professor Balandier in a statement for the important excavation work carried out in the last twelve years in this area by the French Archaeological Mission.

The announcement also noted that she even ranked the quarries that existed there as the “third most important, after the quarries of Petra in Jordan, and Sicily.”

During her presentation, Professor Balandier also pointed out that excavation work was especially difficult this past year due to the coronavirus, because no students were allowed into the area to help. “This year we are doing studies and cleaning,” she noted, “while at the same time the program is being prepared for next year.”

Ancient mosaic on Cyprus only one of spectacular discoveries there

One of the more spectacular discoveries made in the dig is a room with a mosaic floor that had been part of a building from the Hellenistic period.

In another incredible twist, the archaeologists found that the building where the mosaics were found had been supplied with water from a clay pipe that is amazingly still preserved, in what Balandier called “very good condition.”

It is believed that the water came from the area of Tala. Unfortunately, the building appears to have been partially destroyed by later Roman-era construction projects, which even included the construction of a water pipeline and reservoirs.

Paphos Mayor Phedonos expressed his great gratitude to Professor Balandier, who, according to a report in the Cyprus Mail, has been coming to Paphos for 31 years and is fluent in Greek. He also thanked all the other foreign archaeological expeditions that have been conducting excavations in the city recently.

The University of Krakow, led by Professor Evdoxia-Papoutsi-Wladyka, who is of Greek descent, is currently conducting an excavation in Paphos’ ancient market.

A team from Australia’s University of Sydney, under the direction of Dr. Craig Barker, is another major player in the archeological operations ongoing in the Paphos area, with its discovery of an 8,000-seat theater there which was declared to be the largest Hellenistic theater ever found.