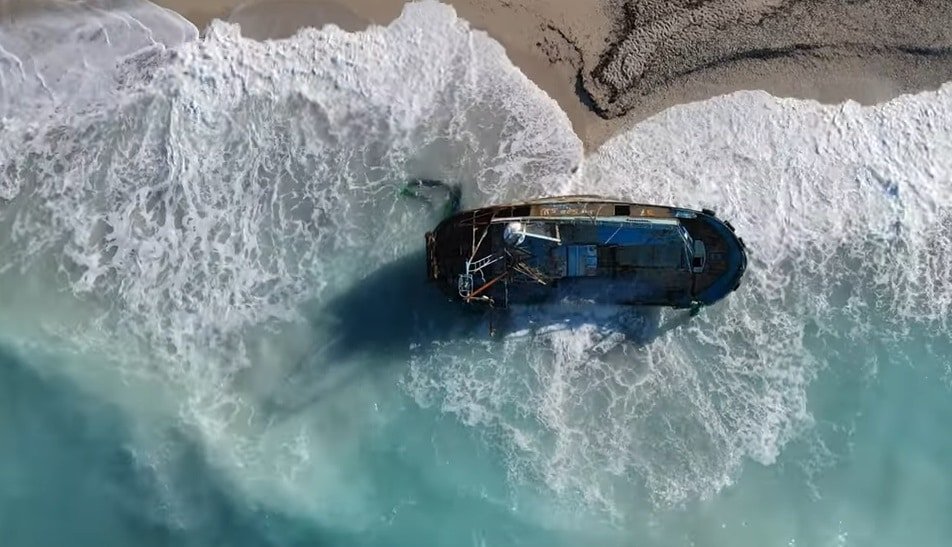 A shipwreck on the Greek island of Lefkada in the Ionian Sea has become a poignant monument to the human tragedy of migration.

The wreck of an old rusty trawler that locals believe had sailed from Tunisia, lies abandoned on Gaidaros Beach in Kalamitsi.

Although it is unclear how the trawler ended up on the beach on December 10, 2021, the Coast Guard assumes it washed up in the midst of bad weather. It had most likely carried migrants from North Africa and Tunisia to Italy, it says.

There is an ongoing mystery over what happened to its passengers. One theory is that they boarded smaller boats sailing nearby and continued their journey to Italy. The worst-case scenario is that they drowned in the Ionian Sea and their bodies were never recovered.

Greece is an entry point for migrants

Greece is a popular entry point into the European Union for people fleeing conflict and poverty in Asia and Africa.

Arrivals to Greece have decreased over the last two years as the country extended a wall along its border with Turkey and began intercepting migrant boats.

More than 116,000 asylum-seekers crossed the Mediterranean to reach EU countries in 2021, according to the UNCHR.

On Christmas Day, at least sixteen people died when a migrant boat sank in the Aegean,  just hours after a similar incident claimed another 11 lives.

The tragedy came amid higher amounts of smuggling activity that had not seen in Greek waters in months.

What will happen to the shipwreck in Lefkada?

Local media in Lefkada say that the shipwreck has become an attraction of sorts, as many people visit the beach to get a glimpse, a photo, or a video.

Discussions have already begun on the island as to whether the shipwreck should be disposed of or stay put. Some believe that the shipwreck could act as a tourist attraction and a focal point for the island, similar to what happened with the famous shipwreck on the nearby island of Zakynthos.

It is now perhaps the most photographed shipwreck in the world. Lying upright on a sandy beach on the northwestern coast of Zakynthos since October of 1980, the wreck of the “Panagiotis” is visited by millions of tourists.

Despite the worry that the wreck would be a blot on the otherwise pristine beach, picturesque “Shipwreck Beach” has now become the very symbol of Zakynthos.

It has been rumored that the ship was smuggling contraband, including cigarettes and alcohol, when it ran aground, on what was originally known as “Agios Georgios Beach,” during stormy weather and low visibility.

The ship was immediately abandoned by its crew, and some of them, mostly Greek sailors, were arrested, along with their captain. However, they were all later cleared of the smuggling charges.

Antetokounmpo Brothers Give Away a House Under the Acropolis