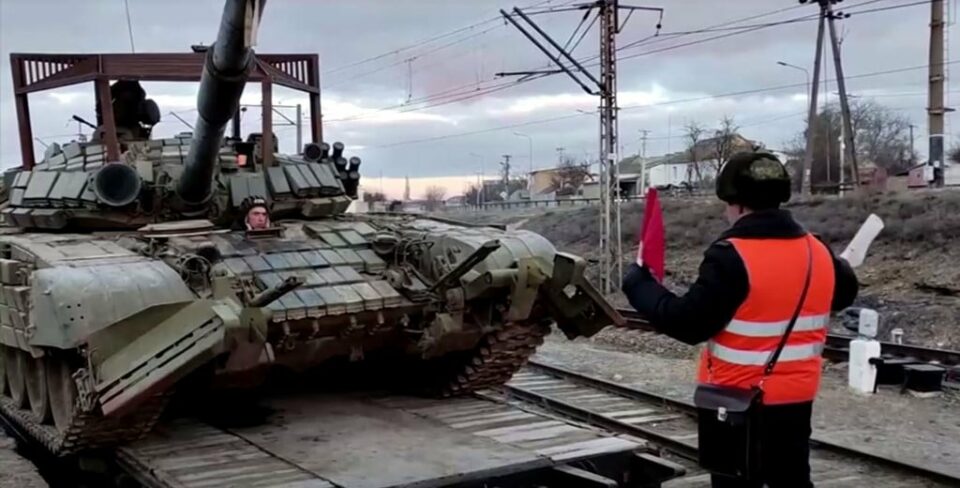 Russia announced on Tuesday it is pulling back some of its troops from near Ukraine after a build-up raised fears of an invasion.

The Russian defense ministry said that large-scale drills continued but that some units were returning to their bases. It has also published official footage that it says shows a number of its tanks and armored vehicles leaving the area near the Ukrainian border.

“Southern military district units have accomplished their assignments during a scheduled tactical exercise at combined-arms ranges on the Crimean Peninsula and are preparing to go back to base,” district spokesman Vadim Astafyev said.

“Tactical battalion groups have marched to train stations, where the loading of hardware on trains is being organized. Heavy tracked armored vehicles, such as tanks, infantry combat vehicles and self-propelled artillery systems, are being fastened onto flatcars.

“The trains will bring the military vehicles and their drivers to bases, including those in the republics of Dagestan and North Ossetia.”

Ukraine warned to wait to see proof of the pull-out, saying “when we see the withdrawal, then we’ll believe the de-escalation”.

Russia must pull back all of its remaining forces from the countries’ shared frontier, Ukrainian Foreign Minister Dmytro Kuleba says.

“We have a rule: don’t believe what you hear, believe what you see,” he tells journalists following reports some Russian troops were returning to base. “When we see a withdrawal, we will believe in a de-escalation.”

He adds that the diplomatic route Ukraine was pursuing with its allies is working at preventing further escalation.

More than 100,000 Russian troops have massed at Ukraine’s border. Russia has always denied it is planning an attack.

The build-up has brought increasingly grave warnings, with the US saying an invasion could come at anytime.

“We are actively working to reach a diplomatic solution to deescalate the crisis,” deputy press secretary Karine Jean-Pierre said, responding to a question about Russian Foreign Minister Sergey Lavrov’s comments that the window for diplomacy hasn’t closed.

NASA Reaches the Sun’s Atmosphere for the First Time

Elon Musk is “Thinking of Quitting’ His Jobs