The price of hotel rooms in Greece has risen to astronomical heights compared to 2019, according to research published this week by a tourism intelligence provider.

According to a report by Mabrian Technologies, the average price of a 5-star hotel room in Greece has risen by 110 percent compared to 2019, the last year before the outbreak of the pandemic.

Mabrian Technologies conducted a study of average hotel prices by room type for all the main Mediterranean destinations, says that “Greece is a big surprise.”

The average price per night for a double room in Greece as advertised during the peak period between July 25 and August 7 is as follows:

Greece is currently the most expensive in the Mediterranean as far as 4 and 3-star hotels are concerned, and the third most expensive for 5-star hotels, below France with an average price per night of 419 euros and Italy at 400 euros. 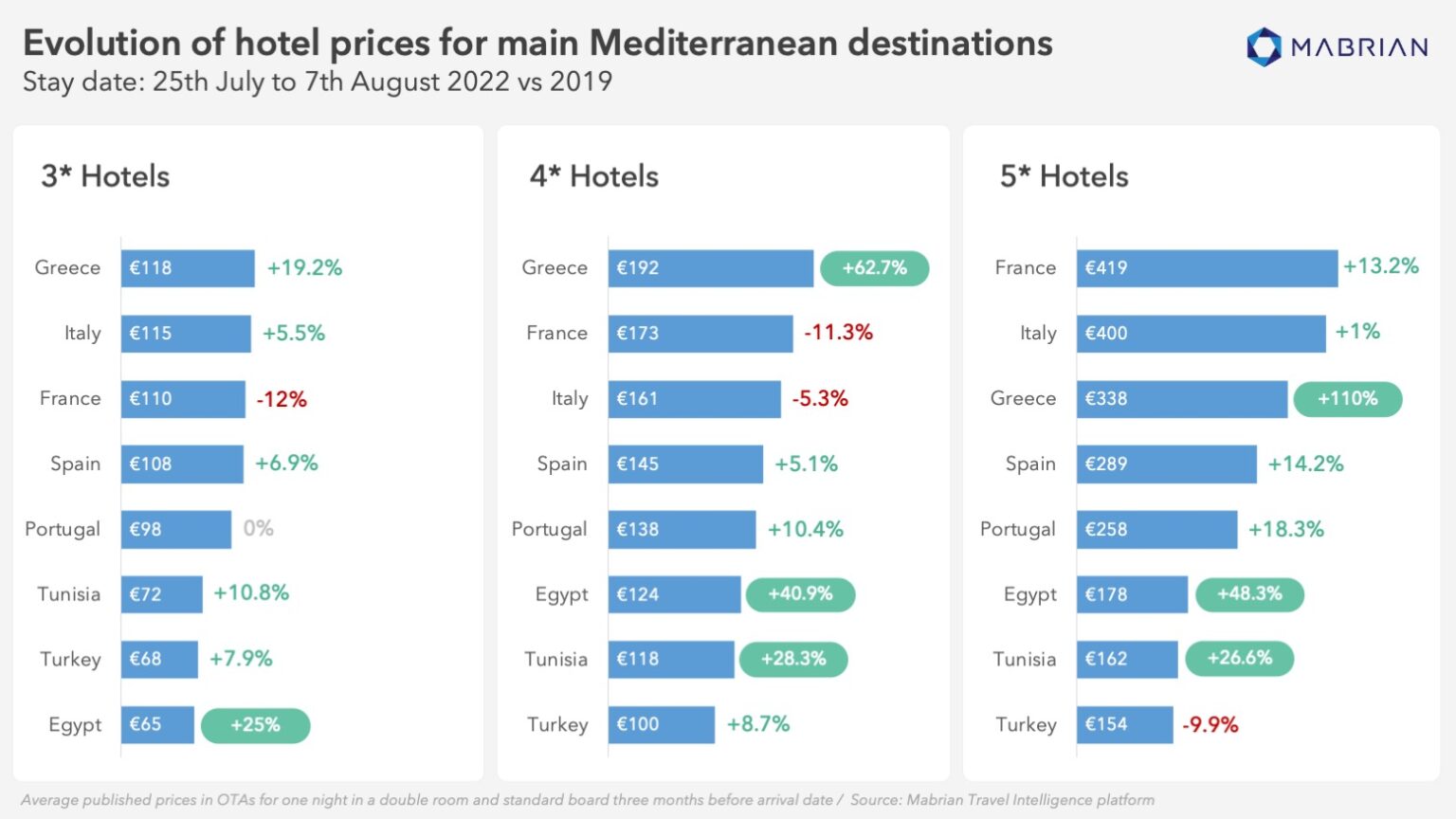 The research shows that France is the main exception, with a 12 percent and 11.3 percent drop in prices for three and four-star hotels respectively.

“But it’s worth pointing out that it is not all bad news, as its five-star hotels are still the most expensive in the region at 419 euros per night and up by 13.2 percent compared to 2019,” Cendra said.

Meanwhile, Egypt’s prices are up strongly across all three categories, at 25 percent, 40.9 percent, and 48.3 percent.

“But Greece is the real star here, with four and five-star hotels seeing a 62.7 percent and a 110 percent increase respectively,” he added.

Cheap hotels in Greece have become a rarity

Across many of the most popular islands, such as Mykonos and Santorini, it is impossible to find any accommodation available for under 100 euros ($103) a night. The minimum wage for a full-time worker in Greece sits just over 700 euros.

In Mykonos, some sunbeds at exclusive beachside bars, restaurants, and clubs can cost nearly as much as the monthly minimum wage in Greece.

In addition to rising inflation rates, which is a global phenomenon, prices in Greece have steadily increased over the years due to over-tourism.

Overtourism refers to overcrowding caused by a massive amount of tourists visiting a place at one time, and it usually leads to difficulties for locals and tourists alike. The phenomenon has been recorded across the world, as well as in many areas of Greece during the summer months.

Ten of Greece’s Most Spectacular Monasteries

Yale Professor Nick Christakis On How Covid-19 Will Change Humanity

Earthquakes in Greece: The Areas of High Risk