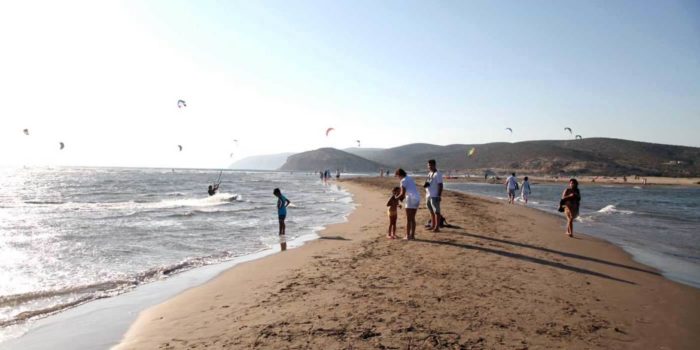 Prasonisi in Rhodes, the biggest Greek island of the Dodecanese, is a stunning beach that surprises visitors depending on when they visit. It transforms itself from being an island to a peninsula depending on the season.

Only 92 kilometers (57 miles) from Rhodes town and just 40km from Lindos, Prasonisi (‘green island’ in Greek) is an impressive beach made of two sandy coves ending in an island that can be reached walking or swimming, depending on the weather conditions and the sea level.

However, Prasonisi is not an island all year. During summer, when the sea level is very low, it turns into a peninsula attached to Rhodes while in winter, with water reaching a higher level, Prasonisi becomes an island once again.

Prasonisi, a unique area to visit in Rhodes

Waves on the right, calm sea to the left, and an excellent location give Prasonisi a continuous strong and stable Meltemi wind that combines with a unique coastline.

Both conditions make it possible to sail in completely opposite conditions in two different seas, the Aegean and the Mediterranean; therefore, Prasonisi is a phenomenal place to practice windsurfing and kitesurfing at any level of expertise.

Even those not so keen on water sports can visit Prasonisi for the landscape and relaxed atmosphere. On the southernmost tip of Prasonisi, there’s a picturesque lighthouse that makes the area an ideal setting for photographers.

For those passionate about history, the nearby town of Vroulia is an ancient settlement where it’s possible to admire an old mosaic tiled floor.

The huge amount of visitors that reach Prasonisi during the summer has had a negative impact, leaving visible evidence of environmental deterioration. Measures have been taken to prevent people from reaching the beach with motor vehicles thus damaging the condition of the sand and the quality of the air.

Strict protective measures have also been taken in an attempt to bring the protected turtle Caretta caretta back to the region, hiding its eggs in the local coves, as it used to do years ago.

Rhodes the jewel of the Dodecanese archipelago

Rhodes, one of the most historic islands in Greece, is one of the most visited places in the country. It is best known for the Colossus of Rhodes. The Colossus, which was one of the Seven Wonders of the Old World, was tragically lost during an earthquake in 226 BC.

Rhodes is an ideal summer destination for its many beautiful beaches. However, there are many things to do there in the winter, as well.

Medieval towns, archaeological sites and museums combine well with the local culinary offerings and the beautiful nature found on the island. For those interested in history, the medieval old town of the city of Rhodes has been declared a World Heritage Site; visitors take a walk back in time as they stroll its cobbled streets.

All Direct Flights Between Greece, US in Record Breaking 2022

Alonissos Among the Top Destinations in the World for Ecotourism

Stranded Whale On Beach Near Athens Unlikely to Recover