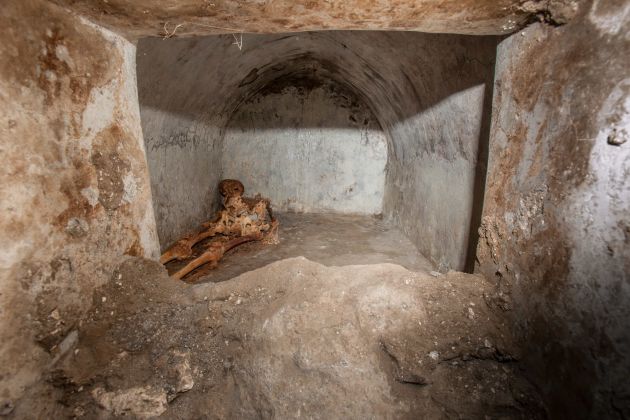 A skeleton discovered recently in Pompeii, the Roman city which was completely destroyed after the eruption of the volcano Vesuvius in 79 AD, proves that Greek culture was thriving in ancient Rome.

The discovery was made in the necropolis of Porta Sarno, an area not yet open to the public that is located in the east of Pompeii’s urban center.

A skull bearing tufts of white hair and part of an ear, as well as bones and fragments of fabric, were found in the tomb. It has been described as “one of the best-preserved skeletons ever found in the ancient city.”

An inscription on the dead man’s tomb identifies him as Marcus Venerius Secundio; incredibly, it appears to indicate that he helped stage performances of Greek plays. It says the deceased “gave Greek and Latin ludi,” or performances.

Performances in Greek at Pompeii

“It is the first clear evidence of performances at Pompeii in the Greek language,” Gabriel Zuchtriegel, director of the Archaeological Park of Pompeii, said in a statement. “That performances in Greek were organized is evidence of the lively and open cultural climate which characterized ancient Pompeii.”

Wax tablet records kept by Pompeian banker Cecilius Giocondu note that Secundio was enslaved and served in the Temple of Venus. However, he rose through the social ranks once he was freed, joining the Augustales priesthood, an imperial cult. Secundio died around the age of 60, buried in a large and impressive tomb befitting his improved social status.

Experts said it was the first confirmation that Greek, the language of culture in the Mediterranean, was used alongside Latin.

In 2019, Italian authorities unveiled an ancient fresco depicting a famous Greek myth in Pompeii to the public.

The fresco is inside a ”domus,” or a home belonging to the upper class of society at the time. It is believed to have belonged to a rich tradesman who desired to decorate his house with artwork inspired by Greek and Roman myths as a gesture of demonstrating his education and wealth.

Pompeii, located in Campania in southern Italy, is an open-air museum where visitors can easily view the shockingly vivid remnants of the complete devastation of the city after the violent volcanic eruption. Nearby Mt. Vesuvius is still an active volcano although it is currently dormant.

New Crocodile Species Discovered — And Its Last Meal Was a Dinosaur

Minoan Language Linear A Linked to Linear B in Groundbreaking Research