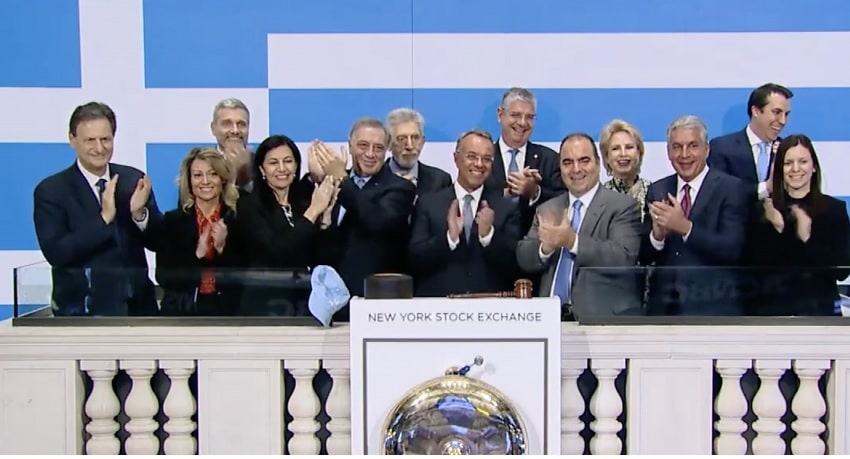 The event organized in the context of the 24th Annual Capital Link Invest in Greece Forum “Sustaining Growth & Investment Momentum,” culminated at the closing bell ceremony when Greek Finance Minister Christos Staikouras and other government officials rang the closing bell for the special day.

He highlighted the long-standing relationship between the New York Stock Exchange and the Greek and Greek-American business communities and also pointed out that NYSE’s commitment to the Greek American diaspora, the Greek shipping and business community, and the listed companies, remains strong.

The ceremony was held with the participation of Greek Ministers, the President of ATHEX Group and high-level executives representing shipping and other companies listed in the New York Stock Exchange.

They referred to the increasing attractiveness of Greece as a business and investment destination, the internationalization of Greek businesses, the close relations between the United States and Greece across the board and also thanked the New York Stock Exchange for the long-standing cooperation and support and for hosting today’s event.

The event was broadcasted live on major news stations in the United States and abroad to an estimated audience of 150 million viewers worldwide.

The active support and participation of NYSE, the world’s largest stock exchange, enhance the prestige and the visibility of Greece to a wider international investment audience. It also shows the stable support of NYSE to Greece, the Greek companies, the Greek shipping industry and the Greek American Diaspora.

The US Capital Markets are a major source of capital for a growing number of companies of Greek interest and the New York Stock Exchange is playing a leading role in this.

The Annual Capital Link Invest In Greece Forum, an international summit about Greece taking place in New York annually, is organized this year in cooperation with the New York Stock Exchange, the Athens Exchange and major investment banks.

With a 23-year track record, this forum has been engaged in a systematic effort to promote Greece as a business and investment destination to a global audience.

Capital Link says Greece has made a notable rebound in the eyes of both the global capital markets and the international investment community in recent years.

“The significant transformation of the country’s investment and economic climate has resulted in a flurry of new and exciting investment activity in the country, signaling a new path forward for Greece, one of modernization, stability, and trust,” it was reported.

Erdogan Wants to Set Up an Islamic “Wall Street” in Turkey

Archie Karas: The Greek Gambler Who Won $40M and Lost it All

Ioannina: A Romantic Weekend Getaway to the Magical Capital of Epirus

The Ancient Greek Stars Lighting Up Our Night Skies