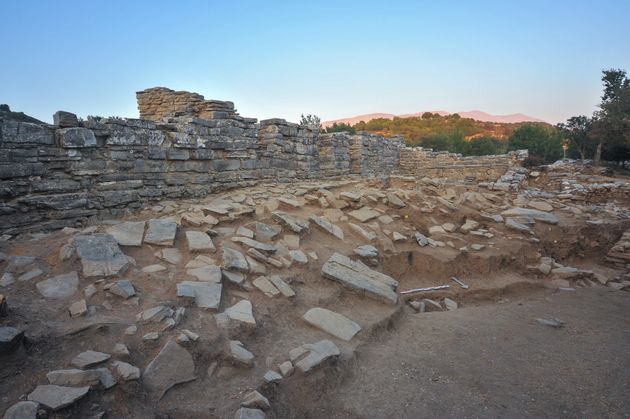 A central courtyard was recently unearthed at the Minoan Palace of Zominthos, along with a ritual axe, an intricately-carved stone seal and a spectacular gold sheet showing a relief of a ship, according to archaeologists who worked this year’s dig at the site.

The courtyard of the Minoan palace at Zominthos, built on the side of Mt. Psiloritis, was the site of religious rituals performed by priests, Dr. Efi Sapouna-Sakellaraki stated in an announcement last week, after the conclusion of the 2021 archaeological season.

The courtyard, which is located at the northern entrance of the main building, constructed in the Neo-Palatial period (1700-1600 BC) illuminates the many roles played by the palace, which was an enormous edifice measuring 1,800 sq.meters (19,375 square feet), with an astounding 71 rooms on its ground floor, including workshops and storerooms.

The archaeological team found that the courtyard had been constructed directly on top of an earlier layer from the Old Palace period.

This year’s excavations, outside of the north facade of the Central Building revealed stunningly beautiful finds that show that the courtyard not only was part of the political administration of the area also was the site of religious functions at certain times.

The courtyard was created during the New Palace period, when the people of Zominthos returned after the major earthquake that had destroyed the original building to rebuild an all-new palace on the very same site, atop its ruins.

The new palace had more stories and was even more elegant than the first complex, with an open-air courtyard that was essential for the operation of the Minoan palaces, since both sporting events and religious rituals took place there.

Archaeologists state that they found buildings measuring at least 100 square meters dating back to the Old Palace Period, from 1900 BC, under the stone slabs of the courtyard. This shows, as they had believed, that the original buildings at the site had been larger than the rebuilt structures.

A number of spectacular finds from this period were found under the slabs, including a tablet with symbols written in Linear A, along with plates, trays, bowls, and cylindrical vessels called “snaketubes.” Many of these vessels had been placed on benches, according to a report from M. Thermou in Mononews.

The palace of Zominthos is a candidate for inclusion on the UNESCO World Heritage List, along with Greek sites such as Knossos, Phaistos, Malia, Zakros and ancient Kydonia.

A ritual bronze double-headed axe was one of the many finds that came to light at Zominthos this year, along with an engraved stone seal showing two aquatic birds, from Area 2 of the site.

The finds made by Sapouna-Sakellaraki’s team led them to conclude that the first and only Minoan palace that had ever been constructed on a mountainside — at an altitude 1200 meters, or 3,937 feet — was a thriving religious center.

She and her team state that Idaion Cave on Mount Psiloritis had forced the rulers of Knossos to create a palatial settlement there, to control the sanctuary, to exploit the wealth of the mountain, and to allow access for pilgrims since the Idahoan Cave was inaccessible during Winter.

Several years ago, a portable ritual altar with symbols had been unearthed at the site; this year’s discovery of the Linear A tablet also reinforces that this was a site of religious ritual during the Minoan period.

In July of 2021, she announced that her excavations revealed that the rebuilt Palace had three stories and that access to the northern entrance was made possible by the construction of a stone ramp, which may have been built as early as 1,900 BC. The ramp ended in a robust retaining wall.

The area had been paved with stones twice during the years 1,700 -1,600 BC and an oblique ritual corridor had been formed in the retaining wall itself.

Researchers believe that the palace of Zominthos served political, economic and religious functions throughout its existence. The nearby religious center of Ideo had an influence spreading throughout the Eastern Mediterranean, the New East and even Egypt.

Their teams have unearthed many treasures from the Minoan palace over the years showing the great refinement of those who lived there, many of which are in the Archaeological Museum of Rethymnon, Crete.  A small information center for the archaeological excavation of Zominthos and Idaion Cave is located in the town of Anogeia.

Gambling on New Year’s Eve is a Greek Tradition