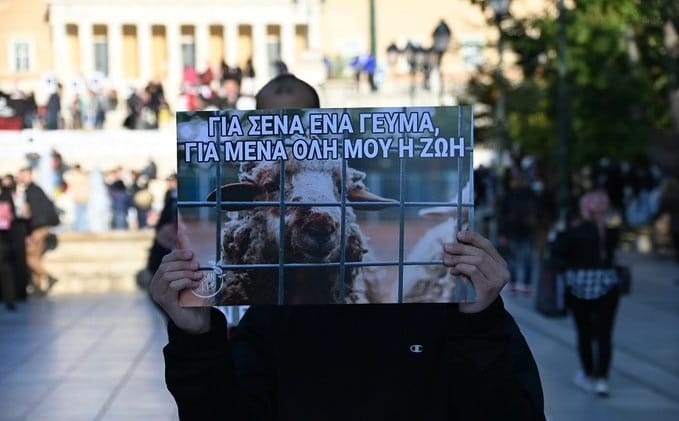 For Greeks, the annual roasted lamb, slowly turning on the spit on Easter Sunday, is not only a mouth-watering delicacy but also part of a centuries-old tradition written into the national psyche.

The event brings together family and friends outdoors and gives everyone the opportunity to drink, sing and dance, culminating in the ultimate feast–the classic lamb on the spit, which holds a great deal of symbolic meaning in the Greek world.

However, in recent years, protesters have begun to criticize the tradition, claiming that it is barbaric.

Each year, hundreds of thousands of lambs are butchered throughout the country. In many cases, and especially in villages, the slaughter takes place in the open, often in front of children. Humane procedures are not always followed.

The origin of eating lamb on Easter comes from the Jewish Passover and is associated with the exodus of the Jewish people from Egypt.

Before setting out on their great exodus, God, through Moses, requested Jews to gather in small groups; each family would have to sacrifice a lamb.

Families were to mark their doorposts with the animal’s blood so that they would not be exterminated by an angel of God, who on that night would bring pestilence to the firstborn of each family if the home was not marked with lamb’s blood.

That night, each Jewish family offered a lamb for the salvation of all people as a sacrifice to God. They consumed the lamb without breaking its bones together with unleavened bread and bitter herbs. They then marked their doors with the lamb’s blood.

Later on, Christians adopted the symbol of the sacrificial lamb, as John the Baptist likened Jesus Christ to the “Lamb of God” who would free the world of their sins with his sacrifice.

According to the late Greek composer Mikis Theodorakis, the “barbaric custom” of roasting a lamb on the spit at Easter should no longer continue to be a part of Greek Easter.

Speaking out against animal abuse, the great Greek composer wrote: “Easter is coming again. The days of the massacre of innocent animals are approaching for the sake of a barbaric [feast] that ought to have vanished long ago.”

In recent years, animal welfare groups have staged protests in Athens and other Greek cities against the annual Easter tradition.

On Wednesday welfare animal groups staged a demonstration in central Athens against the pronounced “barbaric” slaughter of animals.

WHO Halfway Through Greek Alphabet With New Covid Strain Omicron

The Oldest Wine in Europe Has Been Discovered in Greece

US Congress Approves Measure to Restrict F-16 Sales to Turkey

How Was Cancer Treated in Ancient Greece?