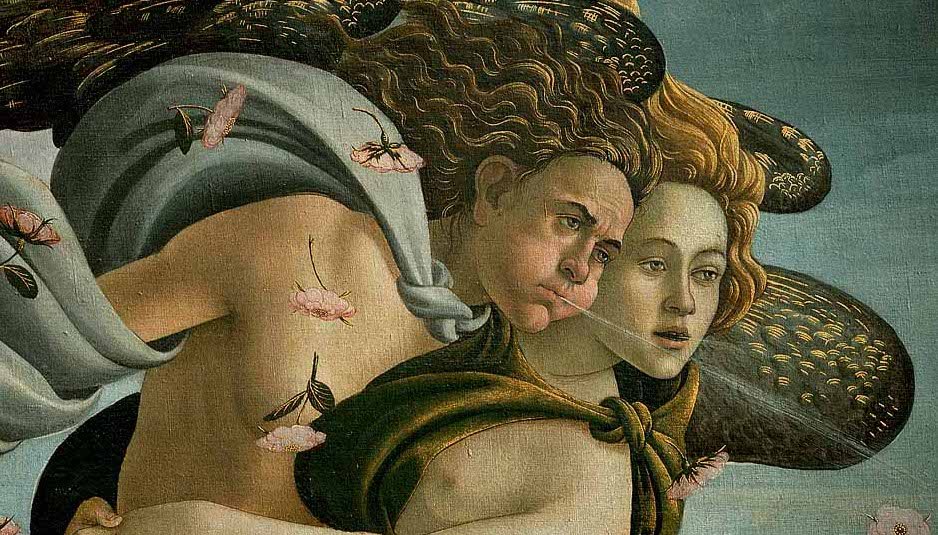 Ancient Greeks believed that the weather, like nearly everything else on earth, was the result of divine activity. Wind, specifically, was associated with the Anemoi, or the Greek gods of the wind.

The Anemoi are the four gods named Boreas, Zephyrus, Notus, and Eurus. Each is ascribed both a cardinal direction based on the direction the wind blows and a season.

Boreas is the Greek god of the North wind, which is cold, and is therefore linked to winter. Thought to bring the winter, he is described as extremely strong with a violent temper.

Frequently, Boreas is depicted as a winged old man with long hair and a beard. The first of the Anemoi is often depicted holding a conch shell and wearing a long cloak.

The second of the Anemoi, Zephyrus, is the god of the west wind, which is the gentlest of all winds.

Believed to be the bringer of spring, according to Greek mythology, Zephyrus lived in a cave in Thrace in northern Greece.

The Anemoi, Greek gods of wind, linked to nymphs

Zephyrus has many wives in various myths. Most well-known is his relationship with Chloris, a nymph associated with spring, flowers, and new growth. Her name refers to a light green-yellow color.

According to myth, Zephyrus and his brother, Boreas, both adored Chloris and competed for her affection, but the gentle Zephyrus beat his hot-headed brother.

Zephyrus gave the nymph domain over all flowers, and together, they had the child Karpos, or fruit.

Notus, or Notos, was the Greek god of the south wind, which was linked to the hot, dry wind of midsummer. Also associated with the storms of late summer and early autumn, he was feared by farmers as a destroyer of crops.

There is some debate about the nature of Eurus, or Euros, as some believe he was the god of the southeast wind while others claim the east wind.

Eurus is linked to turbulent windstorms, including those that sent ships down as they traveled across the rough seas. He is also linked to hot winds, but was not associated with any of the specific ancient Greek seasons of which they had only three.

There were a host of other, more minor, Greek deities whose names were attributed to the particular winds which would blow at various times of the year.

The Romans also adopted some of these gods, giving them new names but still ascribing to them the power to bring different types of weather.

Hence, the next time a Greek summer day is washed out by thunder, rain, and lightning, perhaps it is one of the Anemoi, come back to take their place in the pantheon.

The Anemoi were the sons of Eos, the ancient Greek goddess of the dawn.

Born, according to some Greek myths, from the gods Hyperion and Theia, her siblings were Helios, the god of the sun, and Selene, the goddess of the moon. Her name was spelled in Ionic and Homeric Greek Ἠώς, or Ēṓs, and in Attic Greek Ἕως, or Héōs.

Her children were Anemoi and Astraea, the gods and goddess of the four winds and of five Astra Planeta, or “Wandering Stars”, i.e. planets: Phainon (Saturn), Phaethon (Jupiter), Pyroeis (Mars), Eosphoros/Hesperos (Venus), and Stilbon (Mercury).

What is the National Dish of Greece?

Who is the Most Famous Greek Person that Ever Lived?

Would You Be Considered Beautiful in Ancient Greece?