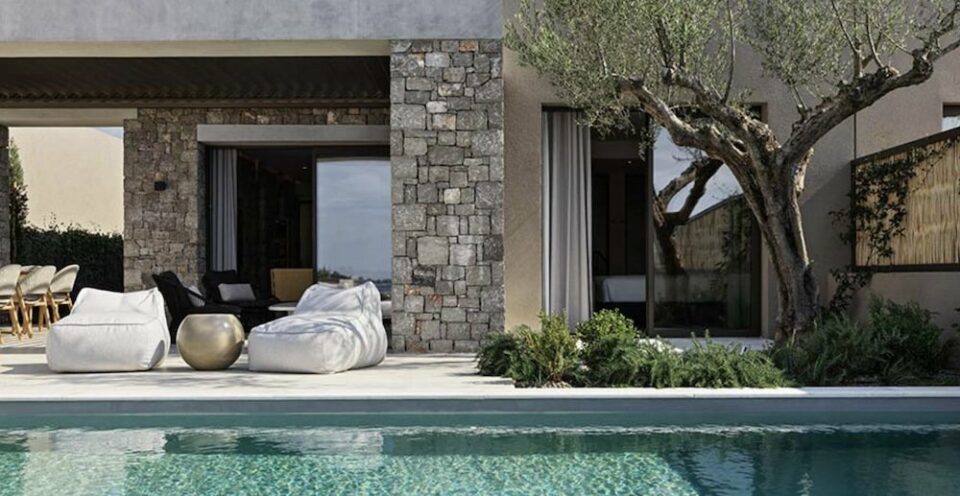 Marriott is set to open an impressive beachfront hotel in Costa Navarino, Greece, which will be a new luxury destination in the Peloponnese. The “W Costa Navarino,” the company’s latest foray into the European market, will open this Summer.

The Greek resort is the latest European hotel to be constructed by the company, which has recently launched hotels in Spain, Switzerland, and Portugal; it will be the first “W” hotel to open in Greece.

The 32-acre property, which is located in the Bay of Navarino, featuring incredible views of the Ionian Sea, boasts a total of 246 rooms, two suites, three villas with private infinity pools, a spa, and a gym.

The hotel itself was designed by Greek architects from Tombazis and Associates Architects, and British interior design firm MKV Design transformed its interiors into a luxurious paradise.

The architects and designers took inspiration from their stunning surroundings for their creations, and they incorporated elements such as wood, reeds, and stone to bring the natural beauty outdoors into each room.

Guests will be amazed by the five incredible dining options that are offered on the property, including the Navarino Agora, which is an open-air marketplace with retail shops, food, and an open-air cinema.

The Marriott hotel will also feature an impressive beach bar that’s perfect for catching views of the sunset over the water.

Costa Navarino has long been a sought-after destination in Greece for luxury travelers. Located in Messinia, in the southwestern Peloponnese, it is famous for its unparalleled beaches, which feature golden sand and crystalline waters.

While popular with international jet setters for its upscale dining and retail options, the region is also known for its beautiful villages full of traditional houses built of stone, a style that is unique to the area.

Pylos, the village closest to Costa Navarino, has become very popular with visitors. Pylos and the surrounding towns feature beautiful seaside walks and eateries. Tourist-friendly beaches such as Glossa Beach and Romanos are located very close to town.

Adventurous travelers also love to explore Nestor’s Cave and the beach of Voidokilia, which resembles a perfect half-circle. The latter is one of the most Instagrammed spots in Greece, thanks to its unique layout.

A narrow strip of land between two turquoise bays, the best view of Voidokilia requires about a half hour hike up the nearest hill.

Navarino Bay was also home to one of the most decisive battles in the Greek War of Independence, the Battle of Navarino.

Fought on October 20, 1827, the Battle resulted in a decisive loss for the Turkish Naval forces, helping Greece expand its military control in the region.

The devastating defeat of the Turks was so complete that they lost control of seas that had been in their possession for centuries, as the Ottoman Empire had controlled most of the Mediterranean Sea from the eastern coasts of Italy all the way to the Middle East.

The Ottomans’ defeat at Navarino was so devastating that their position in Greece was now substantially eroded, putting their presence there under immediate threat.

Rigas Feraios: On the Trail of the Protomartyr of Greek Independence