A strong earthquake of 6.1 Richter magnitude hit in the sea area south of the Greek island of Karpathos on Tuesday morning.

According to the automatic solution of the Geodynamic Institute of the National Observatory of Athens, the seismic vibration was centered in an area 155 kilometers southeast of Karpathos.

The focal depth of the vibration is located at 66.3 km. There are no reports of injuries or damages. 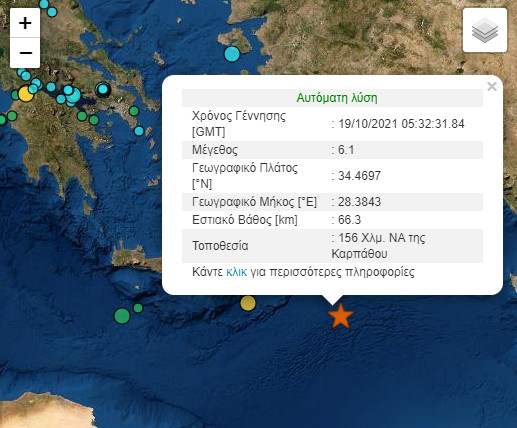 The quake was also felt in Crete, mainly in the eastern part of the island, just a week after the earthquake of 6.3 Richter.

Professor Efthymios Lekkas, noted that the earthquake does not seem to be directly related to those that occurred last week in Crete.

In fact, according to him, “because it is a deep earthquake, it makes it easier to be felt in a wider area and no tsunami or strong aftershocks are expected.”

On the same wavelength, the seismologist and research director of Geodynamics, Gerasimos Chouliaras, appeared very reassuring in his first statements.

As he told ERT, the earthquake occurred very far from the mainland and he estimated that “it is not an earthquake that will create problems”.

Asked if it is an isolated incident, he noted that “one can not say that it is isolated. We may have aftershocks. The depth is huge, 60-70 km. “These earthquakes are deep earthquakes.”

Greece lies in a highly seismically active region. The vast majority of earthquakes cause no damage or injuries, however.

Last October, an earthquake that struck the eastern Greek Aegean island of Samos and the nearby Turkish coast killed two people on Samos and at least 75 people in Turkey.

The country is located in a complex geological boundary zone in the eastern Mediterranean between the African Plate and the Eurasian Plate.

The Fascinating History of Romaniote Jews in Greece’s Ioannina