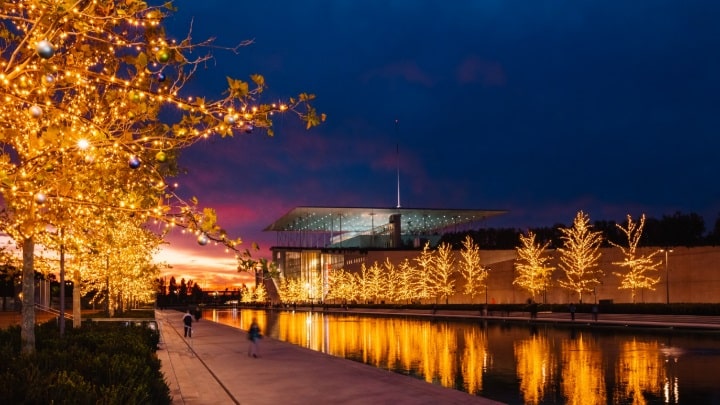 As Greece prepares to celebrate Christmas several events and theme parks have already opened throughout the country. In Athens, there are three major venues where people of all ages can enjoy the festive spirit. Other cities have also prepared innovative theme parks to welcome visitors from Greece and abroad.

The illumination of the Hellinikon Experience Park on December 9 at 19:00 will signal the start of the park’s Christmas holiday program.

The park opened its doors roughly one year ago and has already had over one million visitors, while it is the first section of the largest coastal park at an international level, which was handed over to the public in the context of the urban restoration by Lamda Development, which is now in full progress.

According to an announcement, the opening night will start at the fountain with a show including music and dance. The blue and purple light will turn the park into a spectacular, magical landscape.

The Attica sky will be filled with colors in a spectacular show of ecological fireworks that will cover the sky.

These holidays at the Experience Park will be different, with many surprises and happenings every single day of the holidays, interactive activities and food stalls set up around the Christmas tree.

For the fifth consecutive year, the Stavros Niarchos Foundation Cultural Center (SNFCC) is once again transformed into the city’s most magical Christmas destination.

Four impressive light installations created by prominent foreign and Greek artists were presented at Stavros Niarchos Park, rolling out the magic of the SNFCC Christmas world.

This year’s light installations, originating from magical, festive places in all four corners of the world, as well as from previous editions of SNFCC’s Christmas World, are waiting for its visitors.

The ice rink on the Canal, the lighting installations, the decorated fir trees in the Agora and the illuminated trees along the Canal, the Dancing Fountains, the great celebration of December 1 and the always spectacular New Year’s Eve are just a few of the experiences that have now become a tradition for thousands of visitors, elevating the SNFCC to one of the favorite Christmas destinations.

Τhis colorful Christmas park in the city of Athens is returning for the ninth year at the Technopolis in the Municipality of Athens. Santa Claus made an early appearance, loaded with presents.

The Christmas hero of every child, along with Mrs. Claus, the reindeer and his elves arrived on their heavily-loaded sleigh.

Every day, special events with music, choirs, theater acts, games and all kinds of activities promise to make everyone happy as they finally get out and are able to enjoy the Christmas festivities once again.

Oneiroupoli (meaning “City of Dreams”) takes place at Drama and invites residents and visitors to take a trip into a world of fairytales.

In Greek, Paramythohora means land of fairytales. Paramythohora is a Christmas village where guests are offered many activities, mainly concerned with Christmas stories.

Until the 1st of January, in this fairytale land, children will be able to give their letter to Santa Claus, have fun at the amusement park, the ice rink and participate in numerous events.

Mill of the Elves in Trikala

In the old “Matsopoulos mill” you will experience until the 6th of January, the fairytale Christmas atmosphere. There are dozens of choices, not only in the city but also in the wider area that could satisfy even the most demanding excursionist. Plenty of sightseeing spots and museums exist within the city of Trikala like Varousi, the old town, and the Medieval castle.

Asterokosmos (StarWorld) the impressive Christmas Park at TIF-HELEXPO, invites families to the center of Thessaloniki and welcomes kiddies and the young at heart with a number of festive offerings until the 6th of January.

You will have the chance to experience the magic of Christmas in the frozen forest, the amusement park, the roller coasters, and ice rink, together will all the Christmas heroes of the fairytales.

Santa Claus is the host of a Christmas event that runs from December 15 to January 6. Enjoy the ice skating ring, concerts, workshops and games.

The lake city of Kastoria has always been a favorite Winter destination, but Christmas celebration theme parks have added an extra boost to the city during this festive time.

For decades now, Kastoria has been famous for Ragoutsaria, the traditional Christmas celebrations that are centuries old. Concerts, ice rinks and many jolly Christmas events will fill the area with lights and children’s laughter.