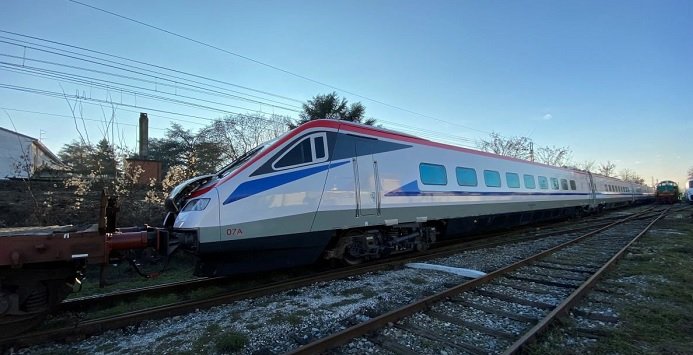 The first high-speed train in Greece originally scheduled to begin service in March 2021 on the Athens-Thessaloniki route is almost one year late.

On Monday, rail operator Trainose announced that the fourth train is on its way to Greece from Italy. The ETR 470 No 6 will be the penultimate to arrive and will be added to the fast route, after the arrival of the ETR 470 trains No 1, 7, and 8 last year.

The much-delayed inauguration of the first route will first have to overcome another hurdle as the Hellenic Railway Regulatory Authority (RAS) has yet to certify the trains, a requirement before the new train goes into operation.

Its inaugural journey was scheduled to take place on March 25, 2021 which coincided with the bicentennial of the beginning of Greece’s War of Independence from the Ottoman Empire in 1821.

The one-year delay was caused by the request of the rail regulator which asked the manufacturing company to fit mechanisms to clear sand and snow on the undercarriages of the trains.

Featuring nine carriages, including four economy-class and three first-class sections, along with a bar and restaurant, the new trains provide an unrivaled level of comfort and convenience for travelers.

With a capacity of over 600 passengers, the trains can make the journey from Athens to Thessaloniki, which once was over four hours, in under three hours and 15 minutes.

In 2017, TrainOSE was purchased by Italian railway giant Ferrovie Dello Stato, the third-largest in Europe, for hundreds of millions of euros.

Upon purchasing the railway company, Ferrovie said that it was ready to spend up to 500 million euros in Greece in the coming years, mainly to buy new trains.

“Voice of the Aegean” Irini Konitopoulou-Legaki Dies at 91