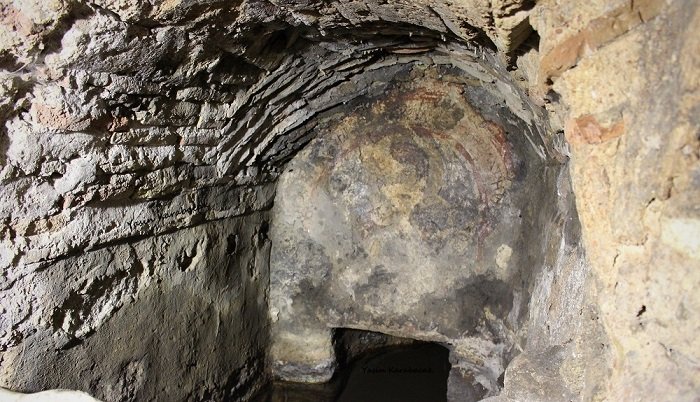 A hidden Byzantine church and a holy spring were recently discovered at an excavation site in the Sultanahmet District of Istanbul.

The site is located on Amiral Tadfil Street in the very heart of the ancient city of Constantinople, lying beneath a building belonging to a former tourist agency known as “Kirkit Voyage.” Workers from the Istanbul Archaeological Museum excavated the area from 1997 to 1998.

The treasures found there include a beautiful floor mosaic and a small subterranean chamber with a niche, with both split apart into two different sectors – one on top of the other.

The upper section, which is one floor below the current street level, contains the floor mosaic as well as the ruins of an unknown structure. The site is estimated to date back to the 5th or 6th century, and was located very possibly near the vicinity of the Great Palace of Constantinople.

A vaulted chamber that is also present appears to date back to the 11th or 12th century, according to the archaeologists.

The second level underneath contains a niche of a former Byzantine church, decorated with a marble slab and containing a small pool of water. A lunette above the area is adorned with a fresco depicting the Theotokos holding the Christ Child.

The researchers suggest that the holy spring, or “hagiasma,” belonged at one time to the Hodegon Monastery. This theory, however, remains unlikely, as the monastery is too far east.

The site can be accessed either through the Kirkit Voyage tourist agency on Amiral Tadfil Street or Sedir Carpet & Kilim on Mimar Mehmet Ağa Street in Sultanahmet.

Important sites including the Byzantine Cathedral of Hagia Sophia and various other notable monuments are in what is now known as the Sultanahmet District, located in the heart of Constantinople.

The great city was called Constantinople by the entire wider world until the 20th century. Although the Ottomans had unofficially called it Istanbul for years, the official name change took place in 1930, after the establishment of the modern Turkish Republic.

First settled in the seventh century BC, the city developed into a thriving port thanks to its prime geographic location between Europe and Asia, as well as its natural harbor. In 330 AD, it became the site of Roman Emperor Constantine’s “New Rome,” soon becoming a wealthy city with magnificent Christian architecture.

Constantinople stood as the seat of the Byzantine Empire for the next 1,100 years, enjoying great prosperity interspersed with a series of deadly sieges over the years, until it was conquered by Sultan Mehmed II of the Ottoman Empire.

This new discovery helps to show that Istanbul still holds a wealth of Greek history that is just waiting to be found.

Mykonos vs Santorini: The Ultimate Battle of the Greek Giants