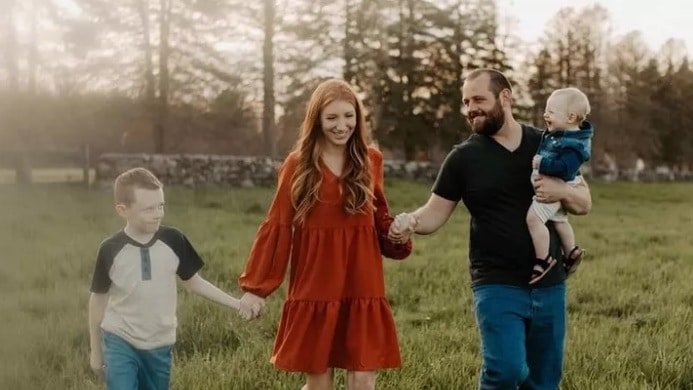 DJ Ferguson, a 31 year old unvaccinated man from Boston is lying in a hospital bed in desperate need of a heart transplant — but doctors refuse to give him one because of his unwillingness to receive a coronavirus vaccine.

The circumstances of such a decision pose an unprecedented ethical issue for the physicians who care for the seriously ill; with the first premise of all medical care the ancient Greek physician Hippocrates’ warning “First, do no harm,” experts are asking how this life-saving medical procedure can be refused over a worry that future harm may be done.

Boston’s DJ Ferguson was removed from the heart transplant list at the city’s Brigham and Women’s Hospital despite the young man being first on the list before his unvaccinated status was revealed, according to a report from CBS Boston.

Supposed heart transplant unvaccinated patient has two children, one on the way

David Ferguson, DJ’s father, stated to the press that his son — who himself is a father of two and has another child on the way — simply doesn’t believe in the Covid-19 vaccine.

“It’s kind of against his basic principles, he doesn’t believe in it. It’s a policy they are enforcing and so because he won’t get the shot, they took him off the list of a heart transplant,” David told CBS.

“My son has gone to the edge of death to stick to his guns and he’s been pushed to the limit.”

Brigham and Women’s Hospital, which is a teaching facility of Harvard University Medical School, stated that its policy requiring recipients to be inoculated against the coronavirus is consonant with many other institutions that do transplantations across the US.

In response to the outcry over the refusal, the hospital told the press in a statement: “Like many other transplant hospitals in the United States, the Covid-19 vaccine is one of several vaccines and lifestyle behaviors required for transplant candidates in the Mass General Brigham system in order to create both the best chance for a successful operation and also the patient’s survival after transplantation.”

Ferguson’s family is now considering relocating him to another hospital in hopes that he will be able to secure a new heart there.

The US Centers for Disease Control and Prevention (CDC) recommends that all immunocompromised people — which includes organ transplant recipients both before and after operations — should be vaccinated because they are especially vulnerable to contracting the coronavirus.

At this point, the Ferguson family says, DJ may already be too weak to move to another hospital.

“His body, his choice”

“We are aggressively pursuing all options, but we are running out of time,” his father said.

While the family states that the care their desperately ill son has received so far has been wonderful, they maintain that the hospital needs to respect patients’ beliefs.

“I think my boy is fighting pretty damn courageously and he has integrity and principles he really believes in and that makes me respect him all the more,” his father said, adding “It’s his body. It’s his choice.”

Incredibly, Ferguson isn’t the first American to be denied a desperately-needed transplant over coronavirus vaccine issues.

Leilani Lutali from Colorado was taken off the kidney transplant list by her hospital in October of 2021 because neither she nor her donor had been vaccinated.

UCHealth, the organization which operates hospitals throughout Colorado, has stipulated that, like Brigham and Women’s in Boston, the vaccine was just one of several different measures that patients needed to take in order that the transplanted organ have the best chance of not being rejected.

Indeed, the the health system said the impetus behind its vaccine policy was that studies have shown that transplant patients are much more likely to die than are others if they do contract Covid-19. They state that the mortality rate for these people, if they do come down with the virus, is more than 20 percent.

“An organ transplant is a unique surgery that leads to a lifetime of specialized management to ensure an organ is not rejected, which can lead to serious complications, the need for a subsequent transplant surgery, or even death,” UCHealth told The Post.

The spokesperson for the healthcare organization added “Physicians must consider the short and long-term health risks for patients as they consider whether to recommend an organ transplant.”

Another American who desperately needs an organ was taken off the transplant list in October as well, when Mike Ganin, from Ohio, who is vaccinated himself, denied after his donor refused the inoculation.

“I don’t want to get the vaccine. I’ve got reasons — medical, religious, and also freedom,” Sue George, the intended kidney donor, told WKYC.

The issue of personal rights vs. the ability to undergo lifesaving treatment is an extraordinarily thorny one. As Dr. Arthur Kaplan, who teaches medical ethics at the New York University Grossman School, tells reporters from Boston television station WBZ,, “Post any transplant, your immune system is basically shut off. The flu could kill you. A cold could kill you. Covid could kill you.

“Organs are scarce, Kaplan continued, adding “We’re not going to distribute them to someone who has a very poor chance of living, when others who are vaccinated have a much better chance post surgery of surviving.”

Greek-American with MS Fights for Handicapped Access in Miami Springs

What Has Russia Ever Done For Greece?

Robert Menendez, Jr, Briefed on Greece, Cyprus as He Heads for Congress

What Americans and Greeks Searched on Google in 2021