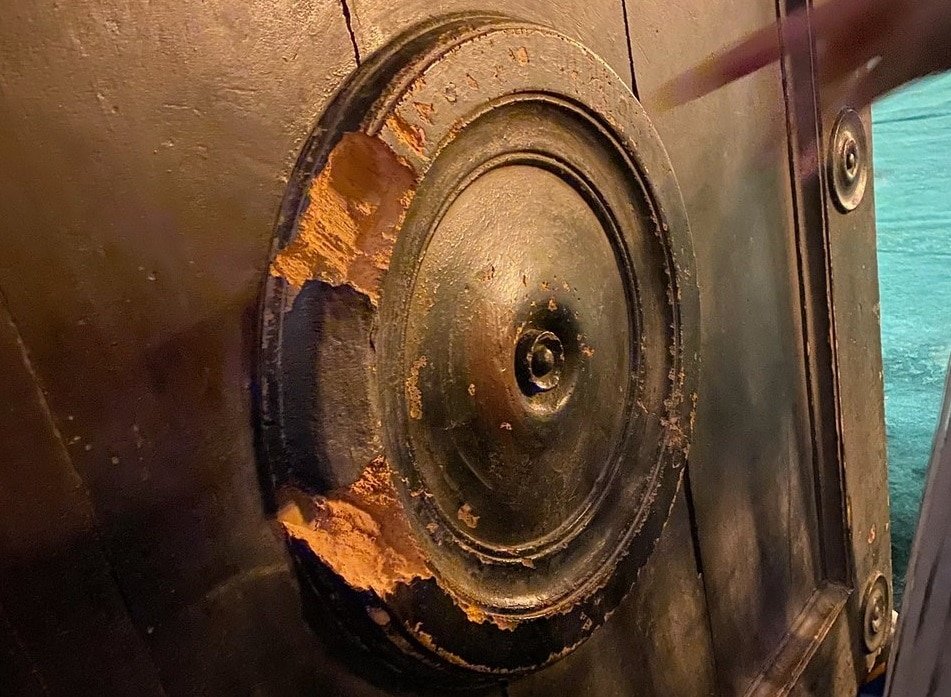 The historic Imperial Gate in Hagia Sophia has been badly damaged a Turkish group announced on Tuesday.

The Turkish Association of Art Historians (STD) posted a picture showing in detail how the oak wood of the 15-century-old gate has been damaged.

The Imperial Gate, the central door, is the largest of the Hagia Sophia and has been has been dated to the 6th century AD. It is about 7 meters high and the Byzantines claimed it was made with wood from Noah’s Ark, which was made of oak.

In Byzantine times the door was also known as the Silver Gates as well as the Beautiful Gates. On either side of the door hung an icon of the Savior and one Mary of Egypt and the Theotokos, brought here from the Holy Sepulchre in Jerusalem. Markings 7ft from the floor show where the icons were placed. The door was also known as Door of Repentance.

In a post on Twitter, the STD said: “We discovered that the historic Imperial Gate of Hagia Sophia is in such a state and we photographed it, around 20:45 tonight (18/4/2022).”

The damage was discovered after the first tarawih prayer in 88 years, a special evening prayer during the Muslim fasting month of Ramadan, was held in Hagia Sophia.

These special prayers involve reading long portions of the Qur’an, as well as performing many rakahs (cycles of movement involved in Islamic prayer).

Perpetrators of Hagia Sophia damage will be prosecuted, Turkey says

The union pointed out the response of the security officer of Hagia Sophia, who stated that he was not aware of the incident and told the union members that they were “ill-intentioned” and all they wanted “was to create trouble,” when they told the man that they would report the incident to the prosecutor.

According to sigmalive.com, the deputy general secretary of the municipality of Istanbul, Mahir Polat, condemned those responsible for the damage, stating:

“The person or persons who caused this disaster should be identified through a camera. The matter should be taken to the prosecutor, as they intentionally caused damage to the number one historic building, the Hagia Sophia.”

Erdogan converted the cradle of Orthodoxy to a mosque

In 2020, President Recep Tayyip Erdogan converted the cradle of Orthodoxy from a museum into a mosque, creating outrage throughout the Christian world.

In his New Year’s Day address to the nation in January 2021,  Erdogan called his decision to convert the Hagia Sophia into a mosque the “crown of 2020.”

The Hagia Sophia, protected by UNESCO as a World Heritage Site, is one of the holiest sites in Orthodox Christianity.

Built where a fourth-century church once stood, the Hagia Sophia was constructed in the sixth century and is one of the best surviving examples of Byzantine architecture.

After the Fall of Constantinople in 1453, the Hagia Sofia was converted into a mosque, and many precious mosaics were destroyed.

The rise of secularism in Turkey during the early twentieth century, spearheaded by President Kemal Ataturk, culminated in the transformation of the site from a mosque into a museum.

Turkey’s decision to change the site once again has faced criticism internationally.

Yoga in Greece: The Perfect Idea for Your Summer Break

Priestess Pythia, the Oracle of Delphi, Spoke Truth to Power