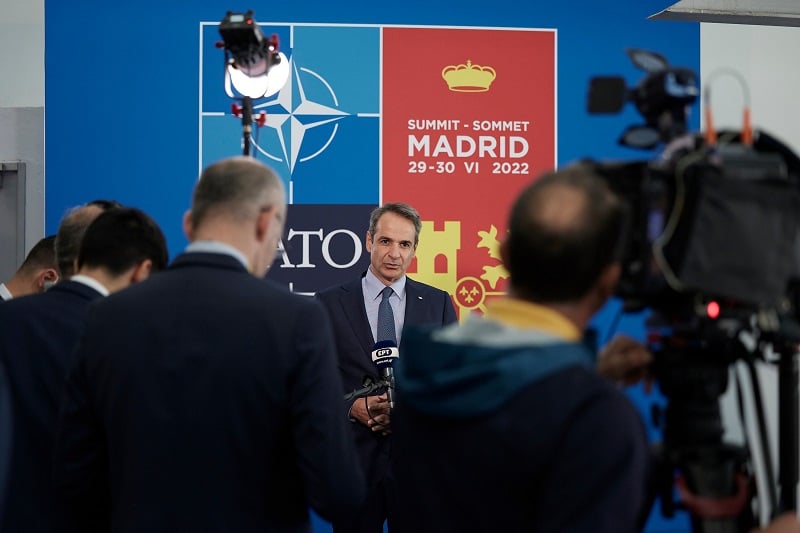 Greek PM Kyriakos Mitsotakis called on Thursday the Turkish leader Recep Tayyip Erdogan to engage in talks in order to deal with the “differences in a civilized manner.”

In a press conference held in Madrid following the NATO Summit, Mitsotakis appeared appearing confident that he will meet with Erdogan in the future at some time, in spite of the latter’s recent statements.

“We must meet, we must talk and we must deal with our differences in a civilised manner, in a framework of good neighbour relations and with international law as the sole point of reference. There is no other framework on which we can rely and resolve our differences.”

The Greek leader responded to Erdogan’s refusal to meet him during the NATO Summit.

“A bilateral meeting with Mitsotakis is not possible,” Erdogan told reporters before leaving for the Spanish capital. “I have said so before, which means that you are not paying attention to what we are saying.”

“That door has closed until they get their act together and when they do, then we can clarify the roadmap and to what extent meetings can take place,” the Turkish President added about the possibility of reopening the channels of communication with Athens amid mounting tension between Greece and Turkey and increasingly aggressive rhetoric from Ankara.

Mitsotakis: Erdogan did not raise Turkish demands at the summit

Mitsotakis also revealed that Erdogan did not raise Turkish demands on the demilitarization of the Greek islands during the NATO Summit.

“I think this indicates something about how well these arguments are able to stand up in an international environment, such as that of NATO, or whether it is finally a line of argument that is more targeted toward [Turkey’s] domestic public opinion,” Mitsotakis said.

The Greek PM added that said he did not expect a repetition of the summer of 2020 when tensions between Greece and Turkey reached boiling point.

He stressed that U.S. President Joe Biden had been absolutely clear in his message to the Turkish president during their meeting regarding the need to avoid tension in the Aegean and in Syria. When asked whether he considered that Erdogan will comply, the Greek prime minister replied:

“I too saw the White House press release regarding the meeting between President Biden and President Erdogan. I think that it was a very clear, very straightforward message that tensions must be avoided in the Aegean and in Syria.

“A direct suggestion to Turkey to return to the table for talks and avoid the extreme rhetoric that we have, unfortunately, been subjected to these last months.”

CBS Apologizes to Turkey for Depicting Istanbul as Part of Greece

Greek Man Kills American Wife in Yet Another Femicide in Greece