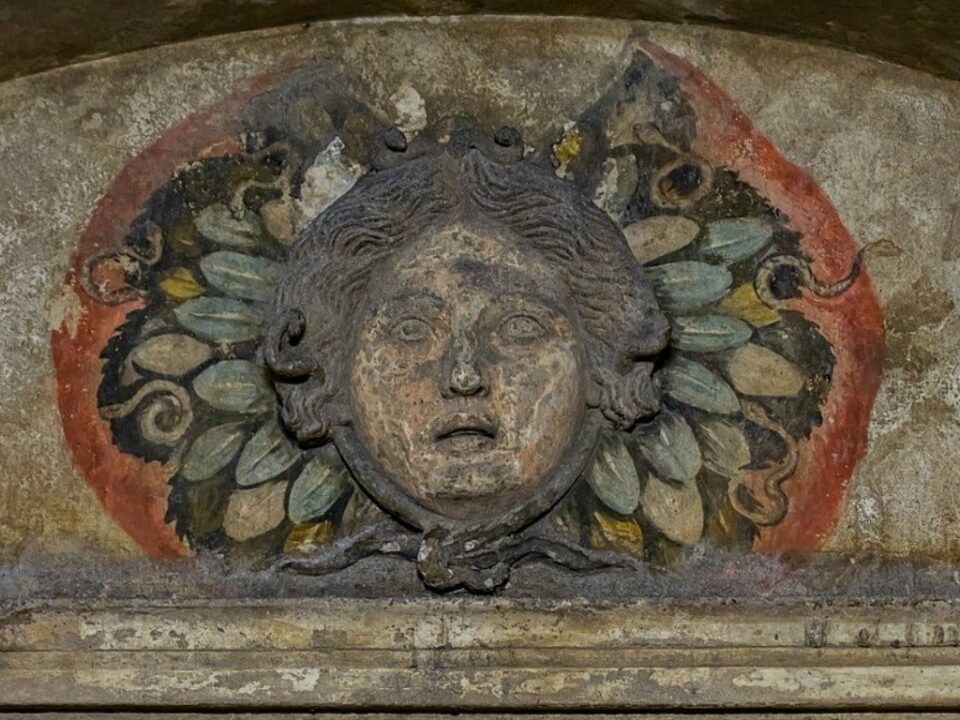 A spectacular Greek necropolis complex at Sanita, just outside Naples, will open to the public later this year, when the world will finally be able to see the stunning tombs that were carved into the volcanic tufa rock by the ancient Greeks who colonized the area.

Just outside the walls of Naples — originally named Nea polis, or New City, by the Greeks — the tombs were first discovered by accident in the 1700s. Since that time they have variously been forgotten, partially uncovered and then opened to a very small number of people who were friends of the aristocratic family who owned the palace that was built atop them.

Now, however, they are being systematically excavated and restored, thanks to a woman who married into the family, who petitioned for the site to be overseen by Italy’s Central Institute for Conservation (ICR).

Greek necropolis is “A living testament to the Greek era”

According to a report in Smithsonian Magazine, workers most likely discovered the tombs way back in the 1700s, when a hole they made in the Palace’s garden above destroyed the dividing wall between two of the necropolis’ chambers.

Lying forgotten again for another century, they were rediscovered in 1889, when Baron Giovanni di Donato, the ancestor of the current owner of the Palace, excavated his property to try to tap into a water source for his garden.

The necropolis had been used by the Romans after the time of the Greeks, but the area was subject to flooding and it was eventually buried in feet of sediment. The sarcophagi the Baron found in the 1800s lie 40 feet below street level now.

The spectacular necropolis contains dozens of rooms that are cut as one piece into the volcanic tufa — the same stone which the Roman catacombs were carved out of.

Two years ago, Luigi La Rocca took the reins at the Soprintendenza, a government department which oversees Naples’ archaeological and cultural heritage. The Greek necropolis was one of the first places he visited. From that time onward, he has made it his mission to open up the spectacular Greek necropolis to the public.

“The tombs are almost perfectly conserved, and it’s a direct, living testament to activities in the Greek era,” La Rocca adeclares, adding “It was one of the most important and most interesting sites that I thought the Soprintendenza needed to let people know about.”

Just as they did elsewhere, the Romans revered Greek culture to the point that they allowed the Greeks whose ancestors had settled the area to continue their lives and practice their culture in every way.

These Greeks built stunningly ornate family tombs, placing multiple bodies in each tomb, presumably all the individuals belonging to one family.

Archaeologists at the Soprintendenza believe that the necropolis was in use from the late fourth century BC to the early first century AD. With its discovery and restoration, La Rocca says that it is now “one of the most important” archaeological sites in Naples.

Another Greek funerary complex, at the nearby Greek colony of Posidonia — later called Paestum by the Romans — also features spectacular artwork, including the only known representational fresco to survive from the time of Ancient Greece, showing the deceased as a young man diving into the sea.

Of course, the area is also not far from the sites of Pompeii and Herculaneum, which were covered by feet of ash in the eruption of Mt. Vesuvius in 79 AD.

The Via dei Cristallini, the Neapolitan street on which the aristocratic di Donato family’s 19th-century palace was built, gives its name to the necropolis, which is referred to as the “Ipogeo dei Cristallini.”

Each tomb has an upper chamber, where funerary urns were placed in niches above benches that were carved into the rock for mourners. The bodies of the dead were placed in the lower burial chamber. But both chambers were richly decorated, with statues — which archaeologists believe may have been of ancestors — as well as sculpted eggs and pomegranates, which are both symbols of new life and resurrection.

Astonishingly, the names of the dead themselves may also be preserved on the walls of the tombs, with the ancient Greek writing still clearly visible.

“The incredible thing about this site is that it was all ‘scavato’ — excavated,” says Melina Pagano, one of the restorers of the necropolis. “They didn’t take the (stone) beds and put them there — they carved (the room and its contents) from the hillside.”

Perhaps most incredibly of all, the beds that the bodies once lay on had integral carved stone pillows that look completely lifelike, as if they are made of down.

Unlike the Roman catacombs, which were carved out of the tufa by ordinary people in an effort to make a suitable burial place for the early Christians, the tombs of the necropolis at Ipogeo dei Cristallini were expertly carved by skilled professionals and boast a wealth of colorful frescoed garlands, and even trompe l’oeil paintings.

One jaw-dropping view greets visitors to the necropolis when they enter one room, which is presided over by the Gorgon Medusa, whose job it is to scare off all the evil spirits who might disturb the souls of the deceased.

The survival of the necropolis complex is for the most part due to the care of the di Donato family, whose scion first had the necropolis excavated in the 1800s — at which time many of the objects found were removed and taken to the Museum National Archaeological Museum of Naples (MANN) and the Soprintendenza.

Numbering approximately 700, they have been displayed at the Museum ever since that time. Some other objects from the necropolis are also in the collection of the family as well.

It was the Baron who had the staircase built that takes visitors down into the necropolis; at the time, he invited local historians to survey the site and record descriptions of the tombs’ frescoes, which have tragically deteriorated since they were discovered.

This was also when the skeletons of the dead were removed from the necropolis — although there are pieces of bones there even today in some areas; these will undergo study before the remains are respectfully interred elsewhere.

After the flurry of activity in the 1800s, the ancient Greek necropolis once more became lost to the world outside of the sphere of the di Donato family; for 120 years they lay untouched behind a locked door in the Palace’s courtyard. No one from the general public ever knew about or was allowed to enter the area.

But that all changed, courtesy of Alessandra Calise Martuscelli, who married into the family.

“Twenty years ago,” she tells interviewers from the Smithsonian, “we went to the MANN to see ‘our’ room (where the Cristallini finds are exhibited), and I was overcome with emotion. It was clear that it was important to open it.”

Calise, who is a hotelier, and her husband Giampiero Martuscelli, an engineer, successfully applied for regional governmental funding and oversight for the necropolis in 2018. Federica Giacomini who supervised the ICR’s investigation into the site, is effusive regarding the priceless frescoes in the necropolis, stating “Ancient Greek painting is almost completely lost — even in Greece, there’s almost nothing left.

“Today we have architecture and sculpture as testimony of Greek art, but we know from sources that painting was equally important. Even though this is decorative, not figurative painting, it’s very refined. So it’s a very unusual context, a rarity, and very precious.”

Paolo Giulierini, the director of the MANN, who is also responsible for the priceless treasures at Pompeii, is keenly appreciative of the immeasurably important Greek cultural heritage of Neapolis as a whole. Despite the historical riches of Pompeii and Herculaneum he believes that Neapolis was “much more important” than they ever were, as a center of Hellenic culture that “stayed Greek until the second century CE.”

Moreover, the museum director believes that the Ipogeo dei Cristallini tomb complex compares only to the painted tombs that were found in Macedonia, the home of Philip II and Alexander the Great; he states that he believes they were “directly commissioned, probably from Macedonian masters, for the Neapolitan elite.

“The hypogeum teaches us that Naples was a top-ranking cultural city in the (ancient) Mediterranean,” Giulierini adds.

Tomb C is the most spectacular of all the four chambers which will open to the public this year. With fluted columns flanking its entrance, the steps leading down to its entrance are still painted red. Six sarcophagi, carved out of the bedrock in the shape of beds, feature “pillows” that still have their painted stripes, in hues of yellow, violet and turquoise; incredibly, the painter even added red “stitches” in the “seams” of the pillows.

The pigments used in these elegant sarcophagi are remarkable in themselves, says restoration expert Melina Pagano, pointing out the Egyptian blue and ocher used on the pillows, as well as the red and white painted floors and legs of the sarcophagi.

Pagano and her team at the ROMA Consorzio used a laser to clean small sections of the stone pillows.

While the only object not carved out of solid rock in the chambers is the life-sized head of Medusa, made from a dark rock, possibly limestone, and hung on a wall opposite the door, it is perhaps the most stunning individual object of them all in the necropolis, looking out on us today with a fearsome gaze across the millennia.

Greece’s Amazing Summer Fruits That You Must Try

Mariupol Besieged, without Electricity as “Worst is Yet to Come”

US House Passes $1.5 Trillion Spending Bill as Inflation Soars to 7.9%