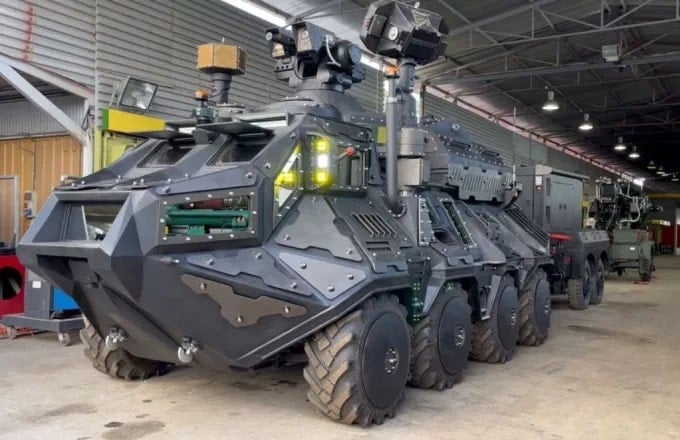 A Greek inventor in Larissa claims to have created an anti-drone system that would destroy Unmanned Aerial Vehicles (UAV’s).

Kostas Soukos named his creation “Minotaur”, after the ancient Greek mythical creature portrayed with the head and tail of a bull and the body of a man.

Speaking to public television ERT Soukos described his creation as a robotic platform that carries a large 300 kWh laser unit.

“It has the power to “blind”, cause ignition of drones that may violate Greek airspace, and is “invisible” to the thermal detectors of the helicopters”, he added.

The anti-drone system is made exclusively by Greek scientists and engineers in Larissa.

“We have proved that Greece is not ‘asleep’”, Soukos said. Our young scientists are producing smart systems that the country urgently needs, he added in reference to the current tensions with Turkey.

So far, Greek military authorities have not commented on “Minotaur”.

Turkey has increasingly been using UAVs to spy on Greece with illegal overflights. In September, Ankara’s state-run news agency Anadolu published a report accompanied by pictures with the title “Drones capture images of armed vehicles sent by Greece to the Aegean islands with non-military status in violation of international law.”

Drones capture images of armed vehicles sent by Greece to the Aegean islands with non-military status in violation of international law pic.twitter.com/qNC18NaC0I

The island of Kinaros, located west of Kalymnos and Leros and east of Amorgos, appears to be of particular interest to Ankara, as drones have conducted illegal overflights on several occasions.

It is unclear what kind of military intelligence the Turkish drone had tried to get by flying over a deserted islet where the only inhabitant is Irene Katsotourchi, popularly known as “Kyra Rini” (“Mrs. Rini”).

Greece is keen to develop its own drone capabilities. It recently unveiled the Archytas drone which will be tasked with monitoring the many Greek islands in the Aegean Sea.

Archytas, developed by the Hellenic Aerospace Industry (EAB), together with three Greek universities was officially presented at the end of September during the Thessaloniki International Exhibition.

The #Greek drone #Archytas is coming

The Greek drone Archytas is coming, according to a statement by the #Greek Minister of Finance, Christos Staikouras. pic.twitter.com/GWN0YnAXWm

It is a fixed-wing drone capable of vertical take-off and landing (VTOL), a feature that is highly appreciated in environments that do not have runways large enough to take off and land the aircraft, whether it is a firm ground or a ship.

So far, the Greek navy has no LHD or similar vessels, making VTOL air assets essential. Currently, several frigates of the Hellenic Navy already have small helicopter-type drones, the Alpha 900.

The Oldest Intact Shipwreck “Odysseus” was an Ancient Greek Vessel

How Being Bilingual Affects Your Brain

The Armenian Contribution to Hellenism and Orthodoxy

Socrates, the Founder of Western Philosophy