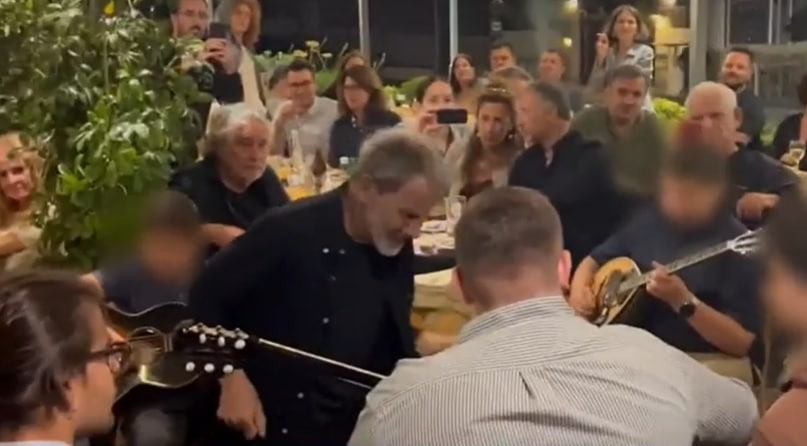 Greek composer Stavros Xarchakos stunned diners at a Greek taverna on the island of Syros at the weekend when he conducted a group of young musicians.

83-year-old Xarchakos displayed amazing energy and youthful spirit in directing the young group playing old “laika” favorites such as “Frangosyriani” written by the legend of rebetiko Markos Vamvakaris in 1935.

The video uploaded on social media has become viral. Some say how lucky the youngsters were to be taught by the great composer. Others note the enthusiasm displayed by Xarchakos.

Xarchakos was born in Athens, where he studied at the Athens Conservatoire. He has family origins from the Mani Peninsula. He emerged in the Greek music scene around 1963, composing music for the theatre and cinema. Among his collaborators was lyricist Lefteris Papadopoulos and singer Nikos Xylouris.

In 1967 he went to Paris to study with Nadia Boulanger. He stayed in Paris for four years, and then studied with David Diamond at the Juilliard School of Music in New York. He served as director of the National Orchestra of Greek Music.

Did Ancient Greeks Build their Temples Where Earthquakes Struck?

The Greek Captain Who Refused to Participate in Bombing of Yugoslavia