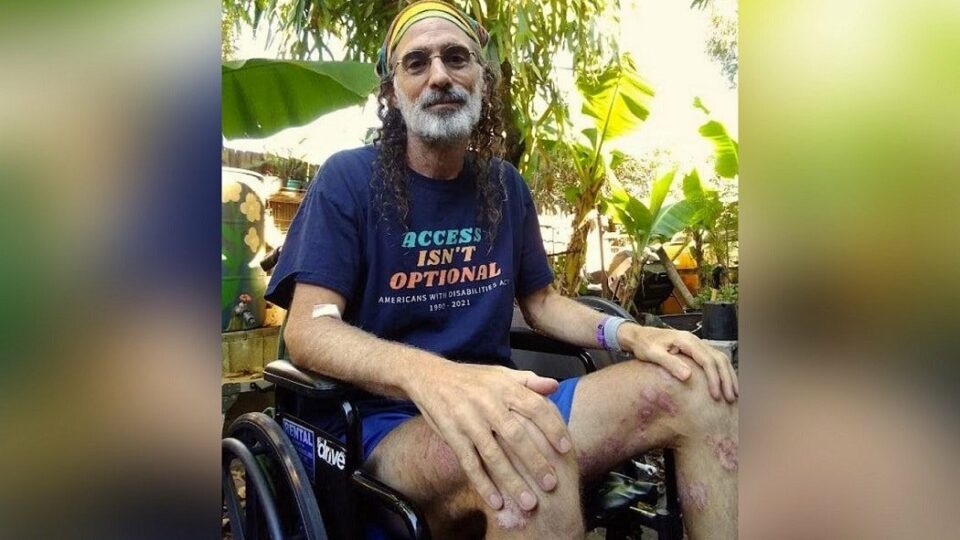 A Greek-American man who has multiple sclerosis and who must use a wheelchair is fighting a war for handicapped access that most believe was decided long ago with the passage of the Americans With Disabilities Act in 1990.

Living in Miami Springs, Florida, 60-year-old Theodore Karantsalis is now mostly confined to his apartment complex since the curbs around his building do not have cutouts for wheelchairs — nor are there any handicapped parking spaces.

This situation has been ongoing for the last five years, despite the near-ubitquitous handicapped access features that have been the norm for decades all over the United States. The city of Miami Springs continues to wage a legal war against Karantsalis, hinging their argument on the point that he waited too long in taking action against the city.

Karantsalis, a retired librarian and local journalist, is continuing the fight that he began with his 2008 suit against the city. Diagnosed with multiple sclerosis during that year, he must use a wheelchair in order to go anywhere at all. In order to use a sidewalk with the necessary cut-out curb, he first must roll out the main driveway of his apartment complex, and enter the street, which is not safe.

That is the crux of his argument, which he says is an illegal situation under the Americans With Disabilities Act of 1990.

Back in September of 2021, then-Federal Judge Ursula Ungaro dismissed Karantsalis’ lawsuit, filed by attorney Matthew Dietz, ruling that a four-year statute of limitations had expired for him to file his claim — since he was diagnosed with MS in 2008.

The oral arguments that were part of the September 2021 case can be accessed here.

However, the U.S. Appeals Court for the Eleventh Circuit has now reversed the prior ruling, remanding his case back for trial, since his disability progressively worsened between 2017 and 2019 to the point that he could no longer walk. That was when the city violated his rights under the ADA by failing to accommodate his needs, the Appeals ruling stated in November.

“His ADA injury is the City’s denial of the benefits of its public services,” the November 12 order reads. “Stated another way, Karantsalis could not have sued the City before he lost his mobility and his ready access to and use of the City’s public services.”

The case of Karantsalis v. the City of Miami Springs raises many questions about statutes of limitations, progressive disability, and advocacy, the Greek-American man’s friends say.

After his MS symptoms improved, he withdrew his lawsuit, thinking at the time that that alone would have affected the outcome of the suit. However, by 2019, Karantsalis’ MS symptoms had worsened once again and he needed a wheelchair to go anywhere at all.

It was then that he refiled his suit, alleging that the city and the its facilities, programs, and services were inaccessible to him.

The district court threw out his suit, however, saying that the four-year statute of limitations, which was triggered before or during the 2008 suit when he was diagnosed with multiple sclerosis, had expired.

Finally, in November, the 11th Circuit Court of Appeals reversed the lower court’s ruling, stating that Karantsalis did not have to wait to sue until his disability finally resulted in a loss of mobility.

On January 12, 2022, a discussion featuring Karantsalis and his ADA case was broadcast on SoundCloud and is available here.

Meanwhile, the retired librarian and former local journalist says that he still faces unsafe surroundings when he tries to leave his home since the city has still taken no action as of this week. “It’s really tough for me to go out of my house,” Karantsalis told Florida Bulldog in an interview, pointing out “I need to roll down my driveway into a busy street. It’s not safe. All I am asking is for them to fix the sidewalk.”

Dietz, a Miami lawyer who specializes in disability cases, said legal counsel for the city of Miami Springs has indicated the city will amend its sidewalks and designate handicapped parking spaces in its public facilities soon.

However, Dietz stated that the city is only doing so in order that Karantsalis’ complaint can be dismissed.

“If they are going to fix it then it will be moot,” Dietz told interviewers from Florida Bulldog, adding “I have not seen any proof of it. And I have requested all the plans, all the documents and all the notes that demonstrate they are going to make the fixes.”

The attorney charged that said the city’s new decision was only adopted in order to avoid paying monetary damages and lawyer’s fees to Karantsalis. “This is a common tactic by municipalities when they are sued over ADA compliance,” Dietz opined.

For its part, Miami Springs City Manager William Alonso stated to the press that the city doesn’t comment on pending litigation. However, Christopher Stearns, a private attorney hired by Miami Springs to fight the Karantsalis case, said in an email “All of the alleged barriers identified in the plaintiff’s complaint have long been remedied.

“The City invites any individuals who believe that any architectural barriers exist to present them to the City’s Disability Advisory Board, where they will be addressed promptly.”

After Karantsalis had voluntarily withdrawn his earlier complaint, he received assurances from Miami Springs officials that they would fix the sidewalks near his house, as well as other public rights of way, he recalled in the Florida Bulldog report.

“At the time, the then-city attorney said he didn’t foresee a problem and that they were looking to make things right as far as ADA compliance goes,” Karantsalis said. “The city manager at the time also promised the city would do the right thing. That was more than 10 years ago.”

Now, the disabled Greek-American man spends “most of my days in my room,” he says, unable to use the city’s new gymnasium because it is “improperly configured to adequately serve persons with mobility impairments,” he says, adding “My doctors encouraged me to get out.

“My dermatologist said it’s important for me to get a little bit of sun and my neurologist said getting in the pool would also be good for me.”

Dietz explained the situation by saying that municipalities would rather fight an ADA lawsuit than simply resolve the issues because such cases are covered by insurance carriers.

“Most of these cases should be relatively simple to resolve,” Dietz said, adding “It’s the same attorney under the same insurance policy that represents these cases. So there is an incentive to litigate.”

An online presentation discussing the arguments of the case, the case findings, and what this case means for people with disabilities and the ADA may be accessed here.

Direct Flights from Canada to Greece Will Launch on April 2