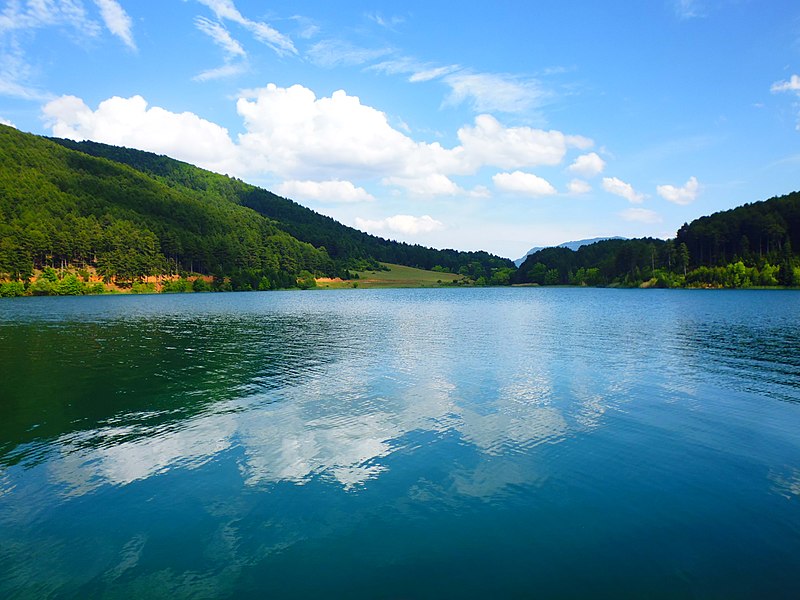 If you feel like a change from the hot beaches on the Athens Riviera, how about taking a late summer or autumn visit to Lake Doxa, in Western Corinthia?

Lake Doxa is an artificial lake created in the village of Archaia Feneos, in Western Corinthia, on the Peloponnesian Peninsula. According to the ancient Greek historian Herodotus, the area was considered part of the Arcadia region, and its name name comes from the ancient city of Pheneus.

The village is located at the foot of Mount Cyllene, the mythical birthplace of the god Hermes. This is why it served as an important center of worship for the god, especially during the annual Hermaea festival in antiquity.

Catullus, a Latin poet of the late Roman Republic, mentioned in his “Poem 68” that there was seasonal flooding of the plain and said that it was drained by an underground canal dug by Hercules during his Twelve Labors.

However, despite being artificially created, the lake is surrounded by unparalleled natural beauty, with the lush green of fir and pine trees creating an idyllic, almost Alpine landscape for visitors.

The creation of the lake, along the small river of Doxa which empties onto the plain of Feneos, was completed in the late 1990s.

The Doxa River had flooded several times in the past, spreading its waters over the entire plain of Feneos, which resulted in expensive damage to agricultural crops which were growing there.

The Church of Agios Fanourios can be found on a small peninsula jutting out into the center of the lake. This small chapel has special commemorations on the feast day of Saint Fanourios every August 27th, when the waters of the lake are blessed by the clergy.

People from all over Greece come to visit the charming little chapel on this festive day each year.

The Monastery of Saint George was also located there at one time, but due to the recurrent flooding, it was moved a short distance from its original site to its new location atop a nearby hill.

Visitors can circumnavigate the lake both by car and on foot. Many people choose to bring their bicycles along to enjoy the beauties offered by the landscape surrounding the lake, while adventurous souls dive into its cool waters.

The spectacular, ethereal beauty of the lake can be enjoyed by simply taking a two hour trip out of Athens. This makes it a perfect place for a quick getaway from the hectic everyday life of the city for families, or anyone else, who needs to get away from it all for a while.

Bringing Folk Music from Rhodes into the Modern Age

Hippocrates on Obesity and the Sedentary Life

New Crocodile Species Discovered — And Its Last Meal Was a Dinosaur