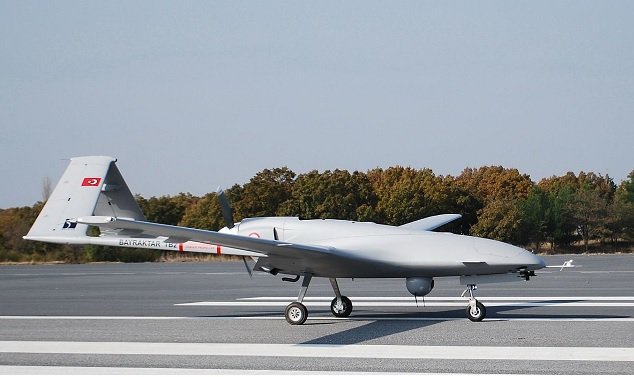 Greece announced on Friday is taking measures to defend against Turkey’s drones (UAV) that have been spotted recently operating over Greek islands in the eastern Aegean.

Minister of Defense Nikos Panagiotopoulos acknowledged the proliferation of UAV flights by Turkey is a concern but added that the Greek defense ministry is taking steps to counteract the potential threat to national security.

“A number of moves are being taken on different levels,” Panagiotopoulos said denying accusations by opposition parties that Greece is underestimating the threat.

“We do not have to report every hour about what moves we make and how we proceed. But the feeling that we are careless in the face of the UAV threat is wrong,” the minister said who also invited companies who develop relevant technologies to come forward with concrete proposals.

Separately, Greek daily Kathimerini recently reported that Athens is instructing diplomats to find ways to prevent Turkey from selling its drones to conflict zones as part of its desire to increase its influence abroad.

Greece, for its part, has also invested in modernizing its armed forces with new weapons systems from France and the United States. In addition, Athens has secured closer relations with Israel and a defense treaty with the United Arab Emirates (UAE).

But there is concern that Turkey could still have an advantage if it continues to promote its UAVs.

Other Greek officials also expressed concern that Turkey could overcome Greece’s qualitative advantage in fighter aircraft simply by ordering more drones to outperform and crush them, according to Kathimerini.

Last August it emerged that an airbase in occupied northern Cyprus was hosting drones from Turkey, causing tensions to rise throughout the region.

An Egyptian official called the drones one of “Ankara’s provocative measures.” Another Egyptian diplomat, speaking to the Associated Press on the condition of anonymity,  told reporters that “The base, along with other measures in Cyprus, Libya and the Mediterranean, would only further destabilize the region. It is alarming.”

Turkey’s drones are seen as “game-changers”

Turkey has invested heavily in exporting and developing its drone fleet, especially the Bayraktar TB-2 and Anka-S.

These systems are capable of airstrikes and are useful for intelligence gathering on the battlefield. Drones have played a central role in Turkish interventions in the Middle East and the Caucasus, during the recent war between Azerbaijan and Armenia.

Turkey’s armed drones have been considered a “game-changer” in many conflict areas and continue to attract attention from the markets in different geographies, the head of Turkey’s defense industries’ body has said, vowing Turkey will continue to further improve its defense industry through an assertive campaign in 2022 despite open and covered embargoes.

“The year 2022 will mark the year when our projects that started in the past are completed, our new systems are delivered to our security forces. We will also start new projects this year in line with our needs,” Professor İsmail Demir, the president of the Defense Industries, said on Jan. 31.

“In addition to these, there will be new projects that will create surprise effects,” he added according to Turkish daily Hurriyet.

Dogs Can Tell Difference Between Familiar and Unfamiliar Languages

Dozens of Migrants Missing after Boat Sinks in the Aegean

Israeli President to Visit Greece, Cyprus Ahead of Erdogan Meeting