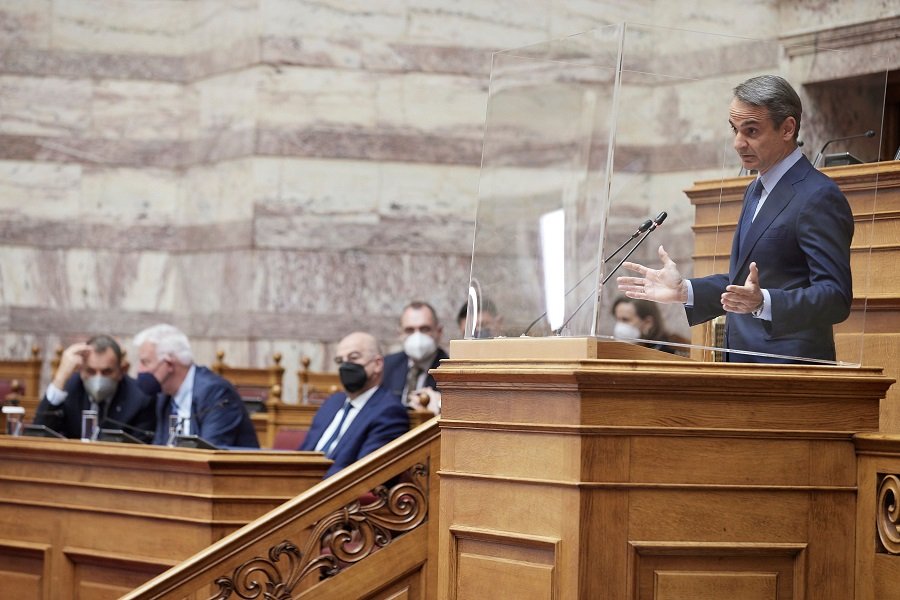 Greece is expected to ratify a landmark defense agreement with the U.S. on Thursday just days before PM Kyriakos Mitsotakis is due to visit the White House.

During the debate in Parliament on the Mutual Defense Cooperation Agreement (MDCA), Mitsotakis appealed to lawmakers’ sense of patriotism.

“The American writer Mark Twain said that patriotism is to support your country at all times and your government when it deserves it,” he said in his speech to MPs, outlining the benefits of the agreement, which has now been extended from one year to five years.

The agreement foresees US Armed Forces operating and training at military bases in Volos, Alexandroupolis, Litochoro, and Souda Bay.

“The specific agreement,” it was said, “ceases to be a bilateral protocol and becomes a vote of confidence in Greece as an unshakeable factor for stability, as a prudent European and NATO partner that guarantees international legality in the face of any crises stirred by our neighbors. Of a crucial hub on the energy map.”

This was an agreement, he noted, that upgraded Greece’s significance and affected not just defense and diplomacy but primarily the economy and energy sector.

“Our country is made the United States’ key partner and interlocutor in the broader region,” he said of the agreement.

The MDCA’s was signed by FM Dendias and US Secretary of State Antony Blinken in Washington on October 14, 2021.

It explicitly states that the United States and Greece “resolve to defend sovereignty & territorial integrity both against actions threatening peace and armed aggression.”

The text is the closest that a conventional text comes to condemning Turkey’s casus belli with Greece.

On Thursday, U.S. Ambassador George J. Tsunis met with Greek Prime Minister Kyriakos Mitsotakis, who is traveling to Washington for a meeting with President Joe Biden at the White House on Monday.

“We discussed how the US and Greece can work together to strengthen our remarkable alliance promoting security and prosperity, building on our fantastic momentum,” Tsunis tweeted.

Honored to meet with @PrimeministerGR Mitsotakis ahead of his visit to Washington and meeting with @POTUS Biden. We discussed how the US and Greece can work together to strengthen our remarkable 🇺🇸🇬🇷 alliance promoting security and prosperity, building on our fantastic momentum. pic.twitter.com/fvdlmvn6eT

During his visit to Washington, Mitsotakis will address a joint congressional session. This is the first time that a Greek prime minister has received such an invitation from the Speaker of the House of Representatives.

The idea for a speech on democracy was taken on the occasion of the celebration of the anniversary of the 200 years of Greek independence. The Congress thus wanted to honor Greece, recognizing that it is the cradle of democracy and that Greek ideals inspired the fathers of the American nation.

Earlier Thursday, protesters from the Greek Communist Party unfurled banners at the ancient Acropolis against the military deal. The banners, in both Greek and English, read “No to war. No to the bases of death.”

Related: Ukraine Crisis: The Critical Role of US Bases in Greece

French President Says He Wants to “Piss Off’ the Unvaccinated

Church of Greece Protests Baptism of Children of Gay Couple