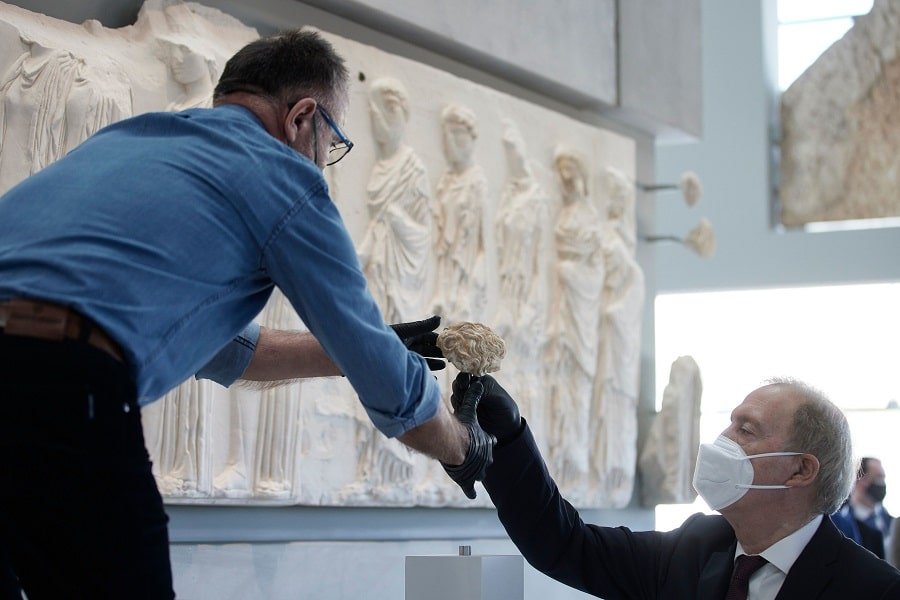 Greece reunited fragments of the Parthenon Marbles exhibited at the Athens Archaeological Museum to the Acropolis Museum on Monday in a highly symbolic gesture, highlighting the Greek demand for the unification of the artifacts.

The handover ceremony at the Acropolis Museum was attended by PM Kyriakos Mitsotakis who, once again, called for the return of the Parthenon Marbles from the British Museum to Greece.

“This sends a strong message for the reunification of all parts of this unique monument to humanity,” he said.

He underscored that “it is a first, but very important, step in the effort to gather here, at the Acropolis Museum, all the smaller and larger parts of the Parthenon that are now scattered in various museums around the world.”

Mitsotakis said that Greece, the scientific community, and UNESCO have been calling for the reunification of the marbles for many decades now.

In late September, UNESCO had made a momentous decision to urge the return of the Parthenon Marbles from the British Museum.

“I believe Prime Minister Boris Johnson personally understands this, as I found out at our recent meeting…He has studied classical studies, he adores ancient Greece and I am sure he will not block any possible future agreement,” Mitsotakis said and added:

“If necessary, he could initiate the amendment of the British law on museums in order to facilitate the reunification of the Parthenon sculptures. There are no more substantial arguments to delay this important issue of the times and of Greek-British relations.”

British Museum to decide the fate of Parthenon Marbles

Boris Johnson told Mitsotakis in November that the British Museum alone is responsible for dealing with Greece’s request for the return of the Parthenon Marbles.

“The Prime Minister said that he understood the strength of feeling of the Greek people on this issue, but reiterated the UK’s longstanding position that this matter is one for the trustees of the British Museum,” a Downing Street spokesperson said after the meeting.

“The leaders agreed that this issue in no way affects the strength of the UK-Greece partnership.”

The Parthenon Marbles were taken from Athens by British nobleman Lord Elgin after he claimed to have made a deal with the Ottoman ruler of the country in the 19th century.

Many historians have since found evidence that the deal made by Lord Elgin to take the marble sculptures to England had no legal standing and is therefore void.

Despite this evidence, the British Museum has consistently refused to return the priceless marbles, despite pleas and protests by not only Greeks, but also by many others across the world, who view Athens as the marbles’ rightful home.

US Will Not Send Diplomats to 2022 Beijing Olympics

Ukraine Calls Up Reservists, Asks its Citizens to Leave Russia