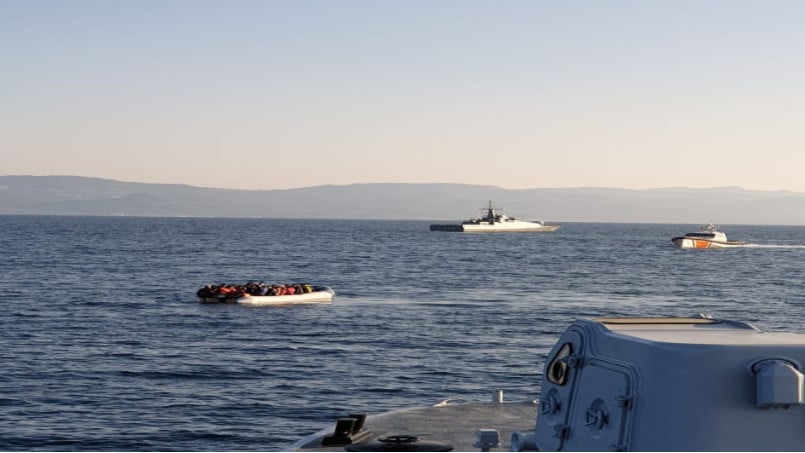 Nearly twice the number of migrants and refugees entered Greece in May 2022 in comparison to the previous year, led in large part by the 8,700 Ukrainians fleeing the Russian invasion.

Since the onset of the invasion in late February, Greece has recorded 32,589 Ukrainians arriving at its borders through May 31st, the Ministry of Migration and Asylum announced Tuesday.

From January through May, 16,237 Ukrainians have submitted electronic applications for temporary protection, and Greece has issued 14,764 permits, according to the data.

About 12 percent more Ukrainians entered Greece last month compared to April, and nearly one-fifth of those were minors.

The rising flow of Ukrainians this year helped propel the 36 percent overall increase in migrants and refugees entering Greece in the first five months of 2022 compared to the same period last year, the data showed.

From January through May, the number of immigrants and refugees arriving at Greek islands increased by over 50 percent and rose by 25 percent at the northeastern Evros border area.

Asylum applications last month also increased, though overall, in 2022, those numbers were down from the previous year. In April, the Greek government announced a dramatic drop in migrants and asylum seekers, particularly on the Aegean islands.

At the time, Migration and Asylum Minister Notis Mitarakis said the population of migrants on the North Aegean islands dropped from 6.41 percent of the total population in March 2021 to just 1.13 percent in March 2022.

The number of refugee and migrant residents overall on the islands dropped by 78 percent in March 2022 compared to the same month last year, the government said, according to a recent report.

For years, Greece has been grappling with a massive refugee crisis at its borders and, in recent months, has been criticized for pushing back migrants attempting to seek asylum.

Greece strongly denies it engages in pushbacks. In late March, an investigation by the country’s national transparency watchdog concluded it found no basis for reports of migrant pushbacks by authorities.

On Monday, Greek authorities charged six of the 108 migrants rescued off Mykonos in a rudderless sailboat over the weekend with illegally transporting third country nationals. Charges against the group included causing a shipwreck and forming a criminal organization. The announcement came a day after the Greek Coast Guard rescued the migrants from the boat, including 63 men, 24 women, and 21 children. Officials had received a distress signal from the vessel. None of those on board was wearing a life vest, the Coast Guard said. Their nationalities are unknown.

The Ministry of Migration and Asylum’s latest data also comes amid Refugee Week Greece, a community-led arts festival celebrating stories of migration, which runs through June 26th in specified locations throughout the country. Organizers say it is a “global and dynamic movement, a cultural festival celebrating the contribution, creativity and authenticity of people having experienced forced migration.”

How Tiffany Trump Found the Love of Her Life in Greece

The Mystery of the Greek Skeletons Found at Roopkund Lake, India

The Philhellenism Museum: A Tribute to Americans Who Fought for Greece