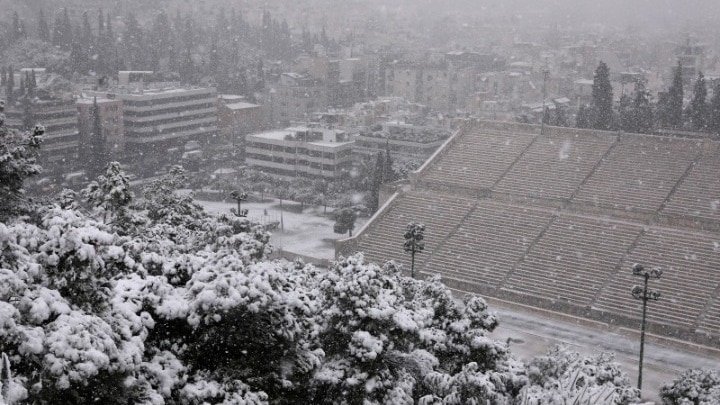 Greece is bracing for more snow on Tuesday as the second and most severe storm that is part of the new front, called “Elpis,” is in progress throughout the country.

Snow is forecast to continue falling throughout eastern Greece, at times heavily, affecting eastern Central Greece, the eastern Peloponnese, Evia, the Cyclades islands, Crete, the Dodecanese islands, and briefly the Sporades islands, Magnesia, and the islands of the Eastern Aegean. Storms are forecast in the Southern Aegean.

The phenomena will begin to abate and then stop from Tuesday afternoon, starting in the north.

Temperatures will drop to very low levels, ranging from -7C to 2C in northern Greece, -5C to 1C in central and southern Greece, -2C to 5C in Western Greece, 0C to 5C on the Cyclades islands and Crete, and from 0C to 6C on the islands of the Eastern Aegean and Dodecanese islands.

Winds will blow from northerly directions, 5-6 Beaufort, and reach up to 7 Beaufort in the Southern Aegean. Northeasterly winds in the Ionian Sea, up to 3-4 Beaufort.

Snow is forecast in Attica, which will start to abate from the afternoon. Icy conditions at night and in the early morning, with temperatures from -2C to 2C.

Mostly sunny in Thessaloniki, with icy conditions during the night and early morning and temperatures from -5C to 2C.

Lockdown declared in Greece on Tuesday

Regions worst affected and shutting down most of their operations include Attica, Boeotia (Viotia), Evia, the Cycladic and Sporades Island groups and Crete.

Specifically, all public administration offices will be shut down. Exceptions include primary and secondary level local government offices, the Armed Forces and security personnel, public health facilities and other services needed during emergencies.

All schools in the public and private sector at all levels of education – including preschool and distance learning – will not operate on Tuesday. This includes recreation centers for special needs people.

Businesses and the retail sector will be shut down also except for the following: food stores, pharmacies and other health facilities, gas stations, and any other businesses that normally operate on national holidays or which contribute to managing the repercussions of the storm, Stylianides said.

Heavy snow in Athens on Monday forced authorities to shut down several streets in the northern suburbs of the Greek capital, including parts of the main Athens-Thessaloniki highway.

The Greek Army has been deployed on the Attiki Odos, the major highway of Athens, in order to help free the hundreds of motorists who have been stuck in their cars for hours due to heavy snow.

The Greek islands have been completely covered in snow since Sunday in a once-in-a-lifetime weather event. Locals say that the last time this amount of snow fell on the Cyclades was decades ago.

Syros, Naxos, Tinos, Andros, Mykonos, Santorini, and the other islands of the Cyclades are covered in a white veil of snow.

Parts of central Greece, including the island of Evia and the Pelion peninsula, are also covered in a thick layer of snow on Monday.

Fish Freeze to Death in Greece