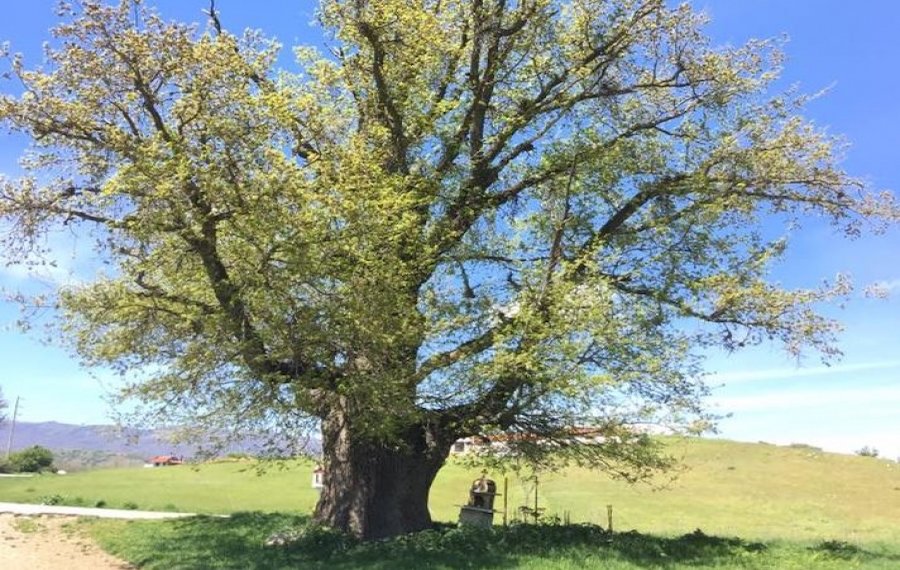 An ancient oak tree in northern Greece is believed to be among the oldest surviving trees of its kind in Europe.

With a trunk diameter of 2.25 meters (7.38 feet) and a height of 23 meters (75 feet), botanists say that the giant oak, located just two kilometers from the main square of the town of Deskati, near Grevena, is approximately 1,300 years of age — give or take 30-50 years.

The residents of the town in northern Greece can now boast that they bask in the shadow of one of the oldest oak trees anywhere in Europe.

The tree stirred the interest of the Municipality of Deskati both for the gigantic size of its trunk and from its obvious age.

“We decided to conduct a study with scientists, foresters and researchers to learn the age of the tree,” mayor Dimitris Karastergios told the Athens News Agency recently.

Botanist Ioannis Spanos, a researcher from the Elgo-Dimitra General Directorate of Agricultural Research, took samples from the tree with his team, making special measurements of the rings in its trunk, and after a study they concluded that the age of the oak tree is an astounding 1,300 years old.

All the necessary procedures were immediately initiated by the Deputy Secretary General of Decentralized Administration of Epirus-Western Macedonia, Vassilis Michelakis, to declare the oak tree a “preserved monument of nature.”

Such a distinction, which confers scientific, ecological, historical and cultural value, signifies that the tree can be valuable in the future for educational purposes while also verifying for future caretakers that the living treasure needs special care and protection.

“We should immediately begin its maintenance, such as removing dead branches, stuffing the hollow trunk with cork and disinfecting it,” Spanos said.

The significance of the oak tree in ancient Greece

In Greek mythology, the oak is the tree sacred to Zeus, the king of the gods. In Zeus’ oracle in Dodona, Epirus, the sacred oak was the centerpiece of the area, and the priests would divine the pronouncements of the god by interpreting the rustling of the oak’s leaves.

The two main types of oaks commonly found in the region are the evergreen holm oak and the deciduous Valonian. Both range in size from a thick low shrub (forming the basis of the modern-day Mediterranean scrub forests) to large trees.

They were valued for their wood and for their acorns, which would ripen in the Autumn. Tannin was also extracted from the acorn cups of the Valonian oak.

This substance was a vital component employed in the tanning of leather hides.

In Greek lore, the primitive, pre-agrarian tribes of Arkadia were said to have lived on a stable diet of acorns.

In classical times it was a food only of last resort consumed in times of famine. Usually acorns were reserved for animal feed.

Tina Livanos: The Greek Beauty Who Married Both Onassis and Niarchos

War in Ukraine Dominates Opening of the Delphi Economic Forum