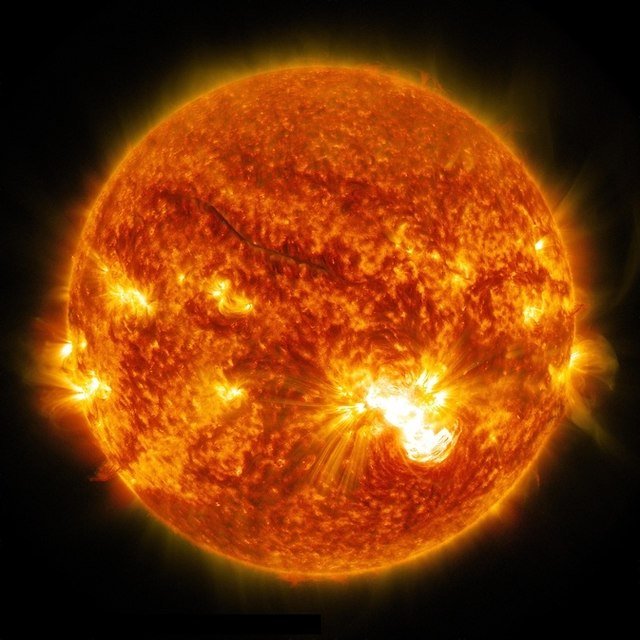 A huge sunspot that has doubled in size in just 24 hours now faces Earth, threatening to send a solar flare our way.

The sunspot known as AR3038 has been growing in size recently, and footage from NASA’s Solar Dynamics Observatory shows how the sunspot has evolved over the past few days, twisting and distorting.

The magnetic field associated with the sunspot means it could potentially send an M-class solar to Earth, which would be the second-strongest type of flare. However, it is not certain whether this will be the case.

Active Region 3038, or AR3038, has been growing over the past week, said Rob Steenburgh, acting leader of the National Oceanic and Atmospheric Administration’s Space Weather Forecast Office. The sunspot’s size and growth rate are fairly normal, he said.

Although M-class flares are the second-strongest type of solar flares, they would probably not be particularly disruptive in any case, as they only tend to cause moderate radio blackout events.

An M9 flare, the strongest of the M-class, might cause loss of radio contact for tens of minutes in affected areas of Earth and degradation of low-frequency navigation signals. M-class flares are also common.

It’s the less common X-class flares that can cause more serious trouble. X-class flares are the strongest type of flare. An X20 flare, for instance, would cause a total frequency radio blackout for several hours. This makes it impossible for boats and planes to use navigation signals during this time.

It should, however be noted that such flares are very rare and are estimated to occur less than once every eleven years, the length of an average solar cycle.

They are relatively cool because they form over areas where the sun’s magnetic fields are so strong that they prevent some heat within the sun from reaching its surface.

These tangled magnetic fields can sometimes suddenly reorganize themselves. When that is the case, a sudden explosion of light and radiation is propelled away from the sun in the form of a solar flare.

Solar flares can cause disruption on Earth, interfering with radio communication networks and navigation systems. This can cause problems for people who work in the marine or aviation industries, for example.

Covid Infections in Greece Surge Past 20,000