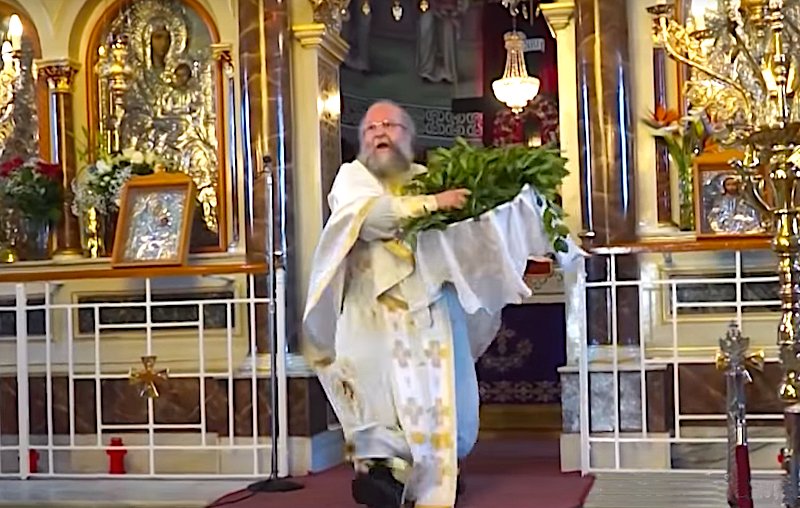 The tradition of the “Flying Priest” from the Greek island of Chios was re-enacted by Father Christoforos Gourlis on Holy Saturday.

Father Christoforos has become nationally known for the theatrical way he comes hopping out of the sanctuary, in order to announce the first resurrection of Jesus Christ.

The church bells of the Holy Temple of Panagia Evangelistria in Chios rang marking the victory of the divine over death, while the “flying priest”  threw handfuls of bay leaves over the faithful.

This tradition that began on Chios years ago has now spread in many parts of Greece and Cyprus.

Holy Saturday is the day Christ’s body lay in the tomb while his followers mourned.

On Saturday morning, the Greeks pack their church yet again to remember how, while his disciples were mourning on earth, Jesus descended into Hades, bringing salvation to the souls of the dead. That’s why Greeks call this Saturday the “First Resurrection.”

Worshippers venerate an icon of Jesus pulling Adam and Eve out of the fires of hell. This is the pivotal moment when Christ has defeated the devil and death.

The priest has changed out of his mournful black vestments and into hopeful white ones. Much happier and more animated now, he tosses dried flower petals — representing the broken chains of hell — over all gathered.

Greece, along with the rest of the Orthodox Christian world, celebrates Easter on Sunday.

Ten Greek Superfoods You Need In Your Diet

Omicron Casts Shadow on Christmas 2021 in Greece and the World